Meet “The Expert”  – This man of mystery is an experienced consultant with a wealth of knowledge to share. In this article we look briefly at the different kinds of woodworm found in the UK and look at the different characteristics of them.

The term ‘woodworm’ is a generic term which covers attack by any wood boring insect.  In the UK there are a number of wood-boring insects which can infect timbers in properties.  However, others which attack trees and logs in forests and woodlands cannot infest or survive in seasoned timber but in such cases the ‘pre-attacked’ timber can be incorporated into buildings where it will present no problem as the infestation is no longer present.

Set out below are some details of wood boring insects which are most commonly encountered attacking seasoned timber in buildings and which, depending on their state, may need treatment.

This beetle is a chocolate brown coloured insect with a variegated appearance due to the presence of patches of yellowish hairs. You are very likely to find the beetles during the emergence period – mid-March to end of June. Attacked wood is virtually always hardwood with some degree of decay, often by the white rot, Donkioporia expansa. Wood is usually oak. However, Deathwatch beetle will attack softwood if well rotted and in contact with infested hardwood. Deathwatch beetle is not usually found in Scotland or Northern Ireland.

The beetles are small and black in appearance. Wood-boring weevil damage is very common in damp skirting boards and embedded joist ends. Wood boring weevils are effectively a secondary pest in that the real problem is the dampness/decay.

A mid reddish brown beetle  the damage it makes looks similar to Common Furniture Beetle damage, the holes being of similar size.

A large beetle black to dark brown in colour with long antennae. This insect is VERY localised to the south-east of England, centred around the Camberley area. House Longhorn beetle can cause severe structural damage.

As described above, some damage to wood may have been caused by ‘forest’ wood 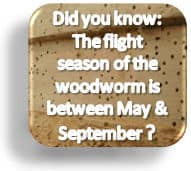 boring insects.  Even where timbers have been infected within a property some wood borers are regarded as innocuous and do not require treatment, and in some cases an infestation has simply died out.

It is therefore important that the specialist surveyor can recognize the particular insect causing or has caused the damage, whether it is a forest insect or innocuous, or even if once active infestation has died out and therefore requires no further attention.

At Timberwise all our surveyors are fully conversant with the wide range of wood boring insects found in the UK, and most important, whether the infestation needs a specialist woodworm treatment or not.  We are fully aware of limiting preservative treatments to only those situations which are necessary, thus we only carry out works where is essential thereby minimising costs and disruption to the client but still maintaining the integrity of the timber.

If you suspect you have a woodworm infestation don’t panic! Call 0800 288 8660 to speak to one of our woodworm experts or click to arrange a survey.

15 thoughts on “Woodworm identification advice from the woodworm specialists”