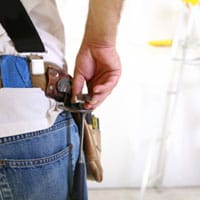 A gang of rogue traders have finally faced justice after tricking pensioners out of a total of £1 million for damp proofing work that was not needed. Building company bosses Paul Hilton and Kevin Christian were jailed for two years and 18 months respectively for running the scam that left 220 victims out of pocket. Unsuspecting home owners  fell victim to the offer of free property surveys, which then exposed damp proofing work they were told needed doing.

Birmingham Crown Court heard yesterday the gang used a DIY-store damp detector that can be triggered simply by touching the palm of a hand.

They then charged victims thousands of pounds for unnecessary and sub-standard damp-proofing work. It is also believed  in some cases the gang treated walls with a clear liquid which turned out to be water.

Some victims were targeted repeatedly. One victim, a 79-year-old woman, was targeted by Hilton and O’Carroll in April 2008.

The woman, who wishes to be known as Mrs W, said:

“A card came through the door advertising damp proofing, then a man came and said it was free. I thought I had nothing to lose. He put this device on the wall, a bit bigger than a mobile phone, and it kept screeching. He started in the living room at the back of the television, but I thought there was no damp there. He went into the front room and then the bedrooms saying it was quite bad.”

The pensioner was initially told any damp proofing work would be free, but was then quoted a four-figure sum.

She paid for the work in cash but thought it strange when the man and youth said they would come back in three months to see if their damp proofing had “taken”.

They visited her again just three weeks later, but left after she told them she was about to go out shopping with her daughter.

Mrs W’s granddaughter -who had recently had her house in Derby damp proofed – visited soon after and saw that the plaster had not been removed while the damp-proofing work was carried out.

Trading standards officers will now seek to recover money under the Proceeds of Crime Act and pay compensation to victims.