Timberwise»Blog»General»Ignore that leaking bath seal at your peril!

Ignore that leaking bath seal at your peril!

Here we have a photo case study from one of our surveyors that highlights the dangers of ignoring leaking bath and shower seals. An insurance company contacted Timberwise Cheltenham to visit a property that showed signs of dampness and fungal decay.

From the initial survey, it was very apparent that the water leak had on-going for some considerable time (between 6 and 9 months) which had allowed plenty of time for problems to occur behind the scenes. The damage had taken place to the master bedroom floor, bathroom floor and landing floor as well at the kitchen ceiling below. Wet rot was found in parts of the property as a direct result of the water ingress allowed by the faulty bath seal. The Wet rot known as Coniophora puteana is one of the most common forms of decay found in the UK and occurs when wood has become soaked through water leakage.

All the Wet rot infected timbers were replaced and precautionary treatments applied to the remain timbers. The pictures below show the devastation that was caused: 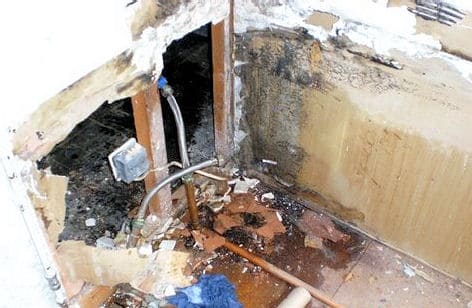 With the bath removed the damage caused by the Wet rot is clear to see. Black mould can also be seen on the wall. 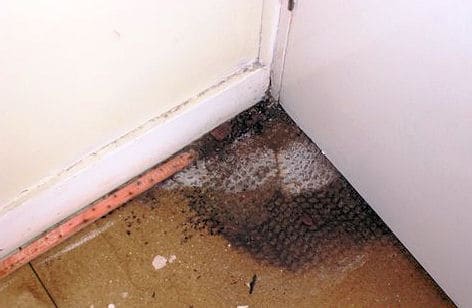 The chipboard floor has lost any strength it had as a result of the water damage. 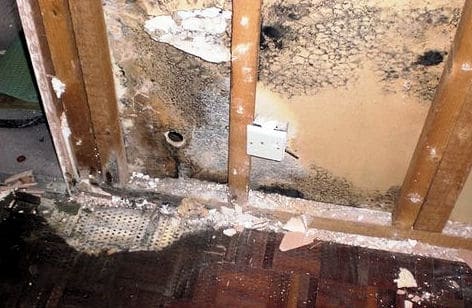 The landing floor is ruined as is the plasterboard partition. More black spot mould can also be seen.

What should you do if you suspect a leaking bath / shower seal?

Ideally, you must sort the seal out as soon as possible to avoid a water ingress and Wet rot problem as seen in the photos above. To help below is a handy video showing the correct way to seal a bath to make sure that you stay leak free!

Do you have a Wet rot problem?

If you suspect Wet rot in your property don’t panic! Timberwise are experts in treating properties that have been subjected to dampness and Wet rot. To arrange a survey from one of our timber surveyors simply complete our on-line survey request form of call your local Timberwise office on 0800 288 8660.