Advice and Information About Cavity Wall Tie Inspection and Replacement

Across the UK millions of properties have issues with the corrosion and ultimately the failure of cavity wall ties. In many instances the root cause of the problem is the initial construction of the property and the original installation of the wall ties – in particular too few been used. Timberwise have a wealth of experience in a wide variety of property care issues, including cavity wall ties. Here we take a look at cavity wall tie replacements and how Timberwise can help from identifying the condition of the wall ties through to replacing damaged wall ties through our non-intrusive and cost effective repair systems.

What are Cavity Wall Ties?

Brick cavity construction was introduced as a building method by the Victorians and was widely adopted from the 1880’s. The two leaves or skins of brickwork (inner and outer) are stabilised by the presence of wall ties at regular spacings horizontally and vertically. Very early wall ties were often specially shaped bricks; these proved to be fragile and iron or steel ties were introduced. Corrosion protection was at best a coating of bitumen, often nothing. Later, galvanised ties were used. The outer end of the tie is embedded in the mortar bed and when this becomes porous to moisture, corrosion can begin. The process is accelerated by ‘black ash’ mortar which contains chemical contaminants.

The rusting or corrosion of the wrought iron or steel causes it to expand and de-laminate. This expansion, if severe enough will cause the mortar bed to split apart and lift creating horizontal cracks which appear at regular intervals up the wall. Often it is the weather facing wall which shows most damage. In the very worst of circumstances the wall tie ‘fingers’ corrode away completely leaving no direct connection between the inner and outer skins of brickwork. Wall collapse has occurred when a large proportion of the ties have completely corroded.

Steel strip ties were replaced with wire ‘butterfly’ ties in the 1960’s and 1970’s. These corrode away to nothing and do not generally cause any mortar bed lifting. They still need to be looked at as total failure can still occur.

A commonly asked question is how long do cavity wall ties last before there is a chance of them failing? Due to the nature of cavity wall ties it can be very difficult to accurately predict the life expectancy of ties, especially those used in the construction of houses prior to 1945. Between 1945 and 1964 a fairly accurate lifespan can be predicted:

As you can tell though by the broad lifespan figures there is no definitive answer to how long cavity wall ties last.

The one thing that is a certainty is that all mild steel wall ties will at some point suffer with some form of corrosion.

How do I know if my cavity wall ties have failed?

It is only possible to identify if a property has failed cavity wall ties when the wall ties have actually failed and the corrosion of the ties has caused damage to both the internal and external walls.

The signs to look out for to help identify a cavity wall tie failure are:

An initial survey of the cavity wall will highlight the presence of horizontal cracking in mortar beds at spacings typically of 450mm. To gauge the condition of the wall ties, we 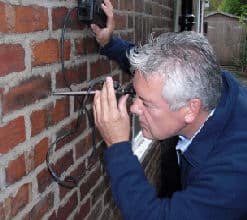 locate a number in each elevation using a metal detector, drill holes nearby and look at the tie within the cavity with an endoscope.

Often we can see the heavy corrosion and de-lamination. If there is any doubt as to the condition of the wall ties, we expose the outer end by taking out the surrounding mortar. The corrosion is easily gauged. Sometimes we find that insufficient wall ties were used during construction, there should be an average of 2.5 ties per square metre. The metal detector survey is used to check the distribution. All accessible elevations are checked unless we are instructed otherwise.

Should the cavity wall ties need replacing the process has three stages:
1. Location of the old wall ties so that the new ones can be installed in an offset pattern.
2. Installation of new stainless steel mechanical (expanding) ties or resin bonded ties. A 10 mm hole is drilled through the face of the brick. After the tie is installed a colour matched mortar is used to fill the hole.
3. Isolation of the old ties by removing the mortar around them or by using grease filled sleeves over the exposed end. The slot or sleeves are then pointed over to make good the repair area.

The work is carried out from scaffolding or temporary scaffold towers depending on terrain and access. Stainless steel wall ties are used as they are corrosion resistant. Replacement cavity wall ties also benefit from our long-term guarantee.

If you suspect your property has a problem with cavity wall ties you will need a survey to confirm the condition of the cavity wall ties and determine if they need replacing or not. To arrange a survey call your local Timberwise office on 0800 288 8660 or complete our on line cavity wall tie survey request form.