We use cookies to improve your experience when using our website. Some cookies have already been set. Find out more about our cookies on our Privacy Policy page.
By continuing to use our site we'll assume that you agree to our use of cookies. Close this message.
Timberwise»Blog»Surveyors Fotofile»Damage to a barn conversion in Kent caused by Death Watch Beetle

Ashford is a market town in mid-Kent, on the southern edge of a big Area of Outstanding Natural Beauty, filled with the chalk hills of the Kent Downs and many fine Jacob and Georgian country houses. Thanks to this location the town became the meeting point of five different railway lines, stimulating growth and employment in the 19th century. When the Channel Tunnel was finished in the mid-1990s, Ashford also got an international railway station, now on the high-speed line from London to the tunnel.

Timberwise were contacted by the owners of a timber-framed converted barn in Ashford to survey the timbers within the property. The barn is set in over an acre of stunning gardens and countryside and dates back to the 19th Century. The current owners were looking to sympathetically modernise and convert the barn into a family home.

They were concerned they had a woodworm infestation as a result of spotting several small exit round exit holes in the timber and fine powdery dust around said exit holes. This is a classic tell-tale sign of an infestation of wood boring insects.

The Timberwise Surveyor inspecting the barn conversion suspected of having a woodworm infestation held the Certificated Surveyor of Timber & Dampness in Buildings (CSTDB) qualification and upon inspecting the timbers, it became clear who the culprit was as a result of the visible damage – Deathwatch beetle.

The Deathwatch beetle infestation had affected all of the structural timbers within the barn. In most cases, a woodworm infestation can be treated with an insecticidal spray applied to the timbers however in this case the damage caused was so severe that parts of the timber were treated with resin-based timber repairs and some parts needed replacing altogether with new timber.

Although discovering a woodworm infestation was not in the plans for the client’s large scale renovation project, with the customer’s patience and Timberwise’s expertise the barn was eradicated from Deathwatch beetle and transformed into a beautiful bespoke home.

It was a complicated project. However, Timberwise rose to the challenge and working jointly with the architects; the barn was successfully converted bringing the period structure into the era of smart home living. The family are settled in and ready to move onto their next project – the back garden!

With the Timberwise long term, 20-year timber guarantee covering the work the client has complete peace of mind that the property is cared for long after the renovation work was complete. 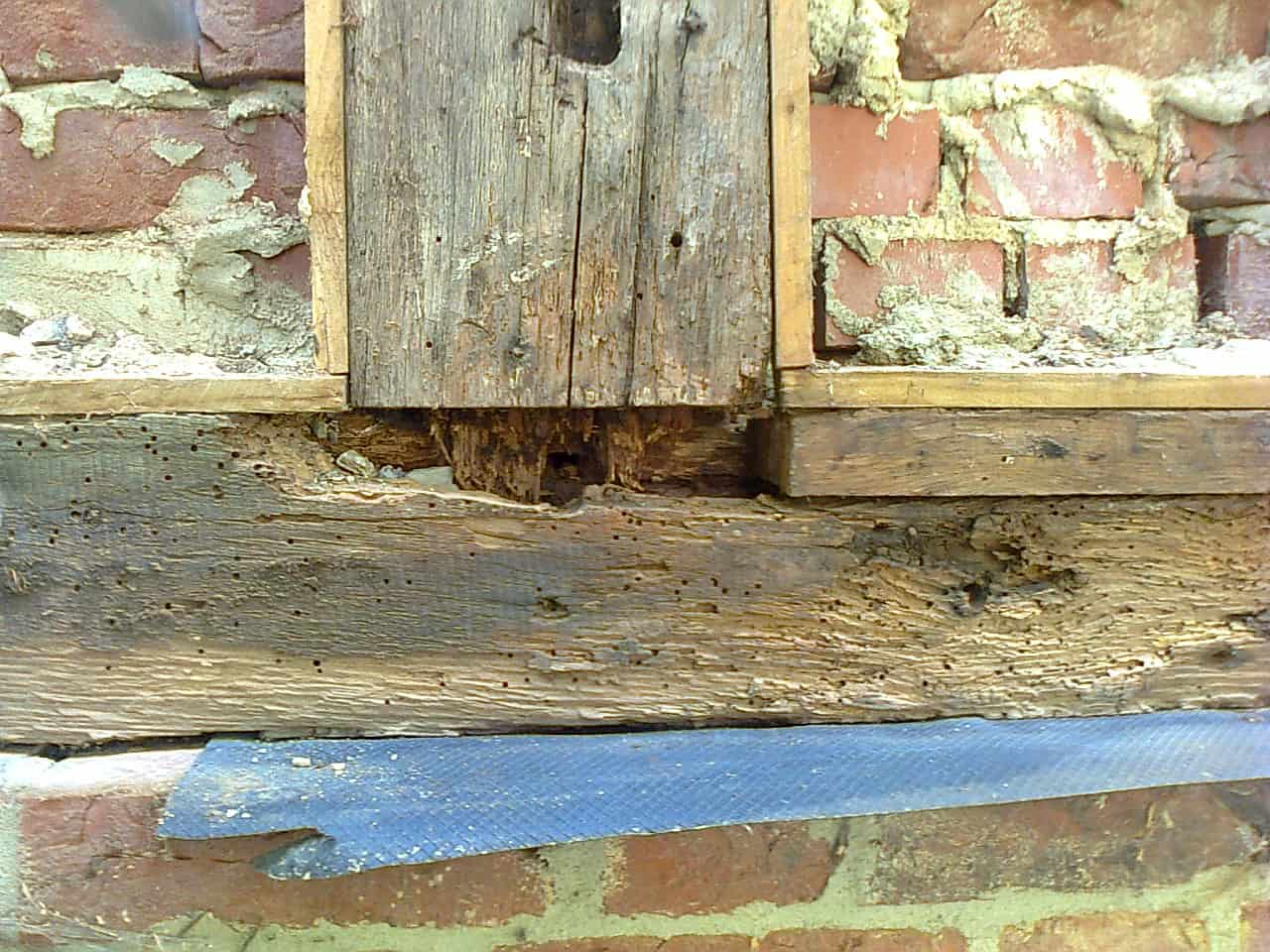 What are Deathwatch Beetles?

In keeping with other varieties of woodworm, Deathwatch Beetles emerge from timber during what is known as the emergence period which tends to be from mid-March through to the end of June.

What damage is caused by Death Watch Beetle?

Deathwatch beetle tends to almost always favour hardwoods, such as oak or elm. It is unsurprising in this case that they decided to call the customer’s barn home. Often the timbers infested are showing some existing signs of decay as a result of white rot (Donkioporia expansa). Deathwatch beetles have also been known though to attack softwoods if they are suffering from rot and in contact with already infested hardwood.

The damage caused looks very similar to that caused by the Common Furniture Beetle although the exit holes are larger in appearance. This is to be expected as Deathwatch beetles are larger in size. The exit holes in the timber are approx. 3mm – 4mm in diameter. Often around the exit hole you will see ‘frass’ which will be bun shaped and is visible to the naked eye. The presence of frass is also a tell tale sign that the infestation is live. The damage within the timber takes the form of extensive tunnelling which weakens the integrity of the timber.

What to do if you suspect a Deathwatch beetle infestation

If you suspect you have a Deathwatch beetle infestation it’s always best to call in the experts to evaluate the situation. A general woodworm survey must be carried out by a qualified timber specialist in order to ensure that the culprits are correctly identified. Only through correct identification of the beetle can the right treatments be carried out. The surveyor will also inspect the property to identify the size of the infestation and the type of woodworm beetle.

The surveyor will also check to see at what stage of the lifecycle the wood boring insect is in – it may be that the damage is historic and therefore requires no further treatment. The level of repairs needed will be assessed and a specification put together for any woodworm treatments deemed necessary to be carried out on the infected areas of timber.

For peace of mind an assessment will be made to see if there are any other property care issues associated with infestation such as dry rot or damp.