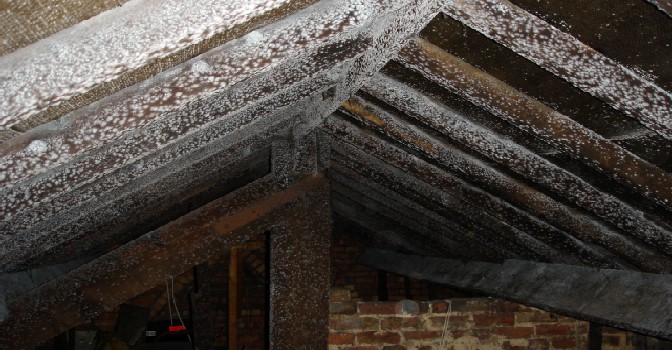 Mould growth found in a loft in Manchester

Mould can be a major pain point for thousands of homeowners throughout the UK, especially if that mould grows in your loft where you might not check regularly. It’s important to not only accurately identify the cause but to deal with it quickly and effectively. For example, a property on the outskirts of Manchester had its owners concerned about damp and mould growth in the loft, and the effects that growth could have on their growing family.

The most common causes of mould are high moisture content in the air, and a lack of ventilation within the property. For this particular customer, there had been a water leak within the space and inadequate ventilation in the attic as well as over insulating the area, which led to the mould growing in the loft space.

Inhaling or touching mould spores can irritate the airways and skin. This then causes congestion, wheezing, chest tightness, coughing and throat irritation. If the mould is left untreated and you are constantly exposed to high levels of indoor dampness, it can reduce lung function and cause chronic health problems such as asthma.

The mould growth we can see in the picture below was caused by over insulating the roof void and, creating a lack of ventilation in the loft as a result. Insulation was found to have been pushed into the eves of the building as well as between the rafters. Because of this excess insulation, the eaves and soffit suffered from poor ventilation.

The roof timbers and insulation had become saturated, resulting initially in the mould growth that you can see growing on the timbers of the attic. The condensation issue, if left unresolved, could also potentially lead to another far more damaging issue – that of dry rot. There is always the potential danger of a dry rot outbreak in the loft timbers as well, as dry rot can occur where conditions are still and humid and the moisture content of the wood is in excess of 30%.

Without doubt, it makes more sense to stop a condensation problem and improve the ventilation in an area than to try and resolve a dry rot problem that has set in the loft, and could be spreading to other parts of the building and creating a far larger problem.

How Did You Treat the Mouldy Timbers in the Loft Space?

It was vital that the customer targeted the source of the moisture and improved ventilation to allow the moisture-laden air to exit the property quickly. Timberwise’s solution to the mould growth problem on the loft rafters was to remove the mould using a mould eradication kit.

Made up of a mould wash concentrate and anti-mould paint additive, the two solutions work together to effectively remove them from problem areas. The kit provided a fast, simple and cost-effective solution to remove the mould. Treating the loft timbers with a fungicidal wash protected the timbers from any future mould growth. Ventilation in the roof space was also increased by removing excess insulation from the eves. The final part of increasing ventilation is vital otherwise the loft space will remain an ideal breeding ground for a more sinister outbreak, dry rot.

Dry rot (Serpula Lacrymans) is a term used to describe a very specific and unique type of wood rot. A destructive force in any home, dry rot will always look for a new food source and can spread through homes with little mercy, destroying the property’s structural integrity in its path. This would of not only devastated the homeowner but also their neighbours as well.

What Should I do if I Discover Mould In My Home?

Our damp specialists in Manchester provide treatments of moulds and can offer specialist, specific advice for you and your property. We supply complete solutions for the control and elimination of condensation and controlling persistent problems with high humidity and associated mould growth in any area of your property, including the loft.

Solving the problem with ventilation and mould reduces significantly the potential health hazards associated with such growth. For advice or to arrange a survey call 0800 288 8660 or complete our online survey request form.

One thought on “Mould growth found in a loft in Manchester”