Is Woodworm Harmful to Humans?

For over 50 years Timberwise have been battling the timber menace that is woodworm! It is a well-known fact that woodworm is harmful to timber – of that there is no doubt. As soon as the warmer weather is upon us people from across the country get in touch with us as soon as they notice the first tell-tale signs of a woodworm problem – holes appearing in the timber. So, woodworm can certainly be harmful to timber but, is there anything else it can be harmful to in the home? Indeed, can woodworm be even harmful to humans? 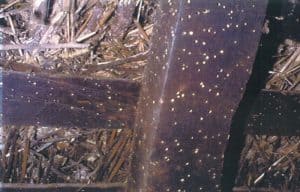 So, we know beetle larvae, that ultimately turn in to woodworm beetles, love nothing more than to munch their way through a delicious piece of timber. Once the small holes are spotted on the timber the damage has been done. The beetle larvae have hatched from the eggs that had been laid previously on or in the timber and have been feeding on the timber, weakening the structural integrity of the timber with every mouthful. It is at this point that timber specialists, such as ourselves, are called upon to treat the timbers and break the life cycle. This is done by coating the timbers with a water based treatment to kill the woodworm beetles when they emerge. This is a proven way to get rid of woodworm.

(If you’re not sure what woodworm look like or about the life cycle of woodworm and the different stages it goes through, we have an article that goes through the various stages of woodworm that will help you). Enough about the damage that can be caused to timbers – is it harmful to humans?

Scleroderma domesticum (sometimes referred to Antiquarians Friend) is in fact a species of cuckoo wasp. This particularly nasty variant is known to prey on beetles, including Common Furniture Beetle (Anobium punctatum). As the name suggests Common Furniture Beetle is the most prevalent of wood boring beetles found in the UK. Both the male and female Scleroderma domesticum are black or brown in appearance and look similar to ants.  There are though some major differences between the males and females.

The male has wings but does not have the ability to sting as it does not have a ‘stinger’. The danger for humans, and woodworm, comes from the female. The female Scleroderma domesticum, although not possessing wings, does come complete with multiple stingers to unleash its paralysing venom. You may be now thinking, “So how does this parasite effect woodworm?”  The answer is that the females enter the timber via cracks and even woodworm holes with the objective of paralysing any woodworm larvae they may come across by stinging them and injecting them with venom. The female then chooses to lay their eggs on the bodies of the paralysed (although still alive) larvae!  This then acts as a food source for the as yet unborn offspring.

As the 1996 song by Space goes – “The female of the species is more deadly than the male” in this case that is certainly true.

Thankfully, the female Scleroderma domesticum is not capable of paralysing humans. She is though capable of stinging humans who may come into close contact with affected timber items. Basically, if a piece of timber (or furniture) has been identified by the female as a potential breeding ground there is always a chance that if a human comes in close contact they may be stung.

If stung the affected area of skin will show signs of red swelling and a rash also develops. Over the course of a few of days this should naturally go down. If it doesn’t go down or there is an allergic reaction to the bite medical treatment will be required.

Another known parasite is Pyemotes ventricosus. Commonly known as the European Straw Itch Mite. It has a similar modus operandi to that of Scleroderma domesticum. Beetle larvae are used as a host for the parasites eggs as part of its life cycle.

Unlike Scleroderma domesticum, Pyemotes ventricosus tends to be found more in furniture. This incorporates timber in such as settees, chairs, wardrobes, and cupboards. When infested furniture comes into human contact there is always the possibility that it can find itself in contact with humans. The result of a sting is similar in appearance to that of a sting from Scleroderma domesticum.

It’s pretty safe to say that although having woodworm in your property is bad enough the last thing you want is to run the risk of either of these two parasites also coming to stay! For this reason alone, it is important that any woodworm problem is treated as soon as possible and not put off unnecessarily. Not forgetting of course there is also the structural damage to the timber that can be caused by the woodworm.

Signs that you may have a woodworm infestation

What should I do if I suspect I have a woodworm problem?

If you notice any of these signs the recommended cause of action is to get in touch with Timberwise. With over 50 years’ experience in treating all manner of woodworm related problems we can be trusted to help you put your woodworm woes behind you. So, stay vigilant!