Timberwise»Blog»Damp»Why Is There Damp in the Chimney Breast and How Do I Fix It?

Why Is There Damp in the Chimney Breast and How Do I Fix It?

We are regular asked by customers why do I have a damp chimney and what can I do to fix it? We all know that if you leave a damp problem to persist then the issue will only get worse over time. If you are seeing damp in your chimney breast, then we would advise to treat it as soon as possible.

Signs of Damp in a Chimney Breast

So, what are the signs of damp? Having damp in your chimney is similar to having it in any other area of your property but it is isolated to the fireplace or chimney breast area. Some signs include having plaster peeling off the wall. If rising damp is the problem, then there will be tidemark up to one metre on the chimney breast. There will also be hygroscopic salts deposited on the walls. You should also look out for dark or discoloured marks on the plaster and there will be a musty smell in the room specifically in the area where the chimney breast is located.

Identifying signs of damp problems on a chimney is the easy part of the process, the difficult task is trying to find the cause of the damp issue.

The causes of chimney damp are similar to how damp caused is in other areas of the property however, there are also extra potential damp problems that can occur. Before any damp proofing can take place, the source of the moisture problem must be rectified.

There can sometimes be more than one cause for damp to occur, so we would always recommend that you have a qualified damp specialist inspect your chimney breast, to see exactly where the damp problem originated from.

One of the main reason’s rainwater can enter your property is through the cracks in the chimney. Older properties are prone to this which will allow rainwater or other forms of moisture to penetrate through into the property.

Having blocked guttering or broken gutters will allow water to enter any cracks in the mortar which not only can cause chimney damp, but also other damp and structural problems too. When possible, you should try and identify if your roof has any broken tiles, not just where the chimney is located but check the entire roof.

The main reason for condensation to occur in an unused chimney is that if the chimney has been sealed it will mean that the airflow has been restricted. When airflow is restricted then warm moisture laden air can’t escape this leads to condensation forming. If you have a functioning chimney then having warm moisture laden air when having a fire is unavoidable. There are though issues that can cause condensation to form such as the chimney not working properly.

There may also be the problem that you are sharing a chimney with a neighbour. While this is unavoidable it could be the reason for damp occurring in the chimney. The reason for this is that they may have, for example, installed a new wood burner, or the chimney flue was installed incorrectly. This will then increase the chances of moisture condensing onto walls quickly.

If there are damp stains on the base of the chimney breast which are appearing one metre in height, then it is highly likely that the issue is caused by rising damp. The most likely cause for rising damp on your chimney is from not having a damp proof course (DPC) in place or having a bridged damp proof course.

It is not uncommon for properties, especially older properties, not to have a DPC inserted into the chimney, however, the only way to fix the problem is to have chemical DPC put in place. If there anything that could be bridging the DPC such as debris in the cavity walls, then this will also need to be removed.

How to Stop Damp in the Chimney Breast?

Now we have explained what causes damp in chimney’s, we can answer the question of “how to stop chimney damp?” The first step to fixing the damp problem is by contacting a fully qualified damp expert to determine what is causing the damp problem?

If there are hygroscopic salts left from rising damp, then the damp specialist will suggest that all the plaster that has been affected, will need to be removed and the wall will be then left to dry out. Damp proofing can then take place which may involve the installation of a damp proof membrane. 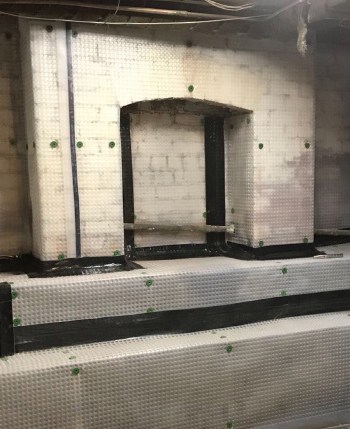 If condensation is causing the damp problem, then air flow will need to be improved if it is an unused chimney. If the chimney has been sealed up, then this will need to be opened up again but with the addition of a chimney cap.

If rainwater is penetrating its way through as a result of poor maintenance then the damaged guttering, broken tiles or cracks in the walls will need to be fixed first to stop any leaks from happening. For it is more than likely that you will need a building contractor to fix the problem.

For more information on damp problems and damp proofing methods check out our guides online or if you need chimney damp diagnosing then you can book a survey online with Timberwise.