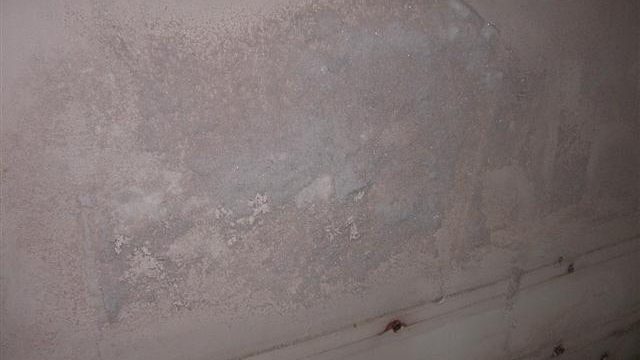 What Are Hygroscopic Salts?

If you have never owned or rented a property before, and want to make sure that not only do you understand the different terminology out there relating to damp but also how to recognise it in everyday life, then this is the page for you.

What are Hygroscopic Salts?

Soluble salts such as nitrates and chloride become concentrated where water evaporates out of your wall. Usually, the water evaporating is the product of a form of damp, either rising damp or penetrating damp.

These salts, being soluble, are therefore more susceptible to drawing in and absorbing the moisture in and around your home. That’s an issue because it means that any humid air in your property that wasn’t previously affecting your walls could be absorbed by the hygroscopic salt much more easily.

Now, what does hygroscopic salt usually look like? Well, usually when the hygroscopic salts themselves become sodden with water, you will see what is often referred to as a ‘tide mark’. This presents as a long line either across or down your wall, where the moisture is evaporating from your wall and the salts have become concentrated.

What you may even find is that these tide marks fade and darken at different times of the day. That’s because the salts themselves are going to present differently depending on the amount of water they are holding at any point. In a bathroom, for example, the tide marks may be faint in the morning after no one has used the room for many hours. After a shower or bath though, the condensation from the warm water could cause the tide marks to return (if visible), and that would be a clear sign that your properties walls are being affected by hygroscopic salt. 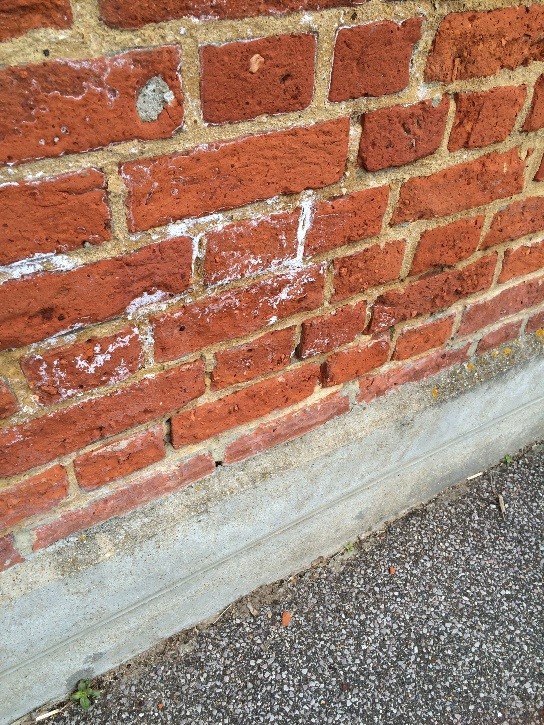 An example of hygroscopic salts in a red brick, exterior wall

What can the full effect of the hygroscopic salts be though?

What Can Hygroscopic Salts Do To Your Walls?

The first thing you need to understand about hygroscopic salt is that it doesn’t appear and group in your walls without a pre-existing condition. So, if you haven’t already, you should definitely call up a damp removal specialist or surveyor to begin the process of having the damp or other moisture problems in your property not only revealed, but dealt with so that the hygroscopic salts don’t return to your property in the future.

Having said that, it’s also important that you understand that there may already be damage to your walls present that could have been inflicted from the pre-existing damp. This could range from a few different possibilities, from weakened structural support to the utter rot and removal of decoration on your walls. Again, be sure to get in touch and have a damp specialist look at your property as soon as possible. 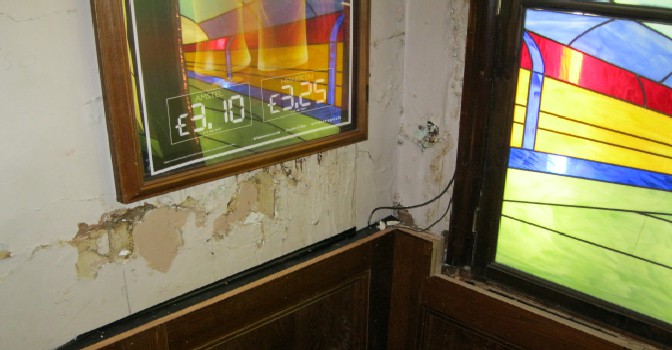 Damage wrought on an interior walls plastering due to hygroscopic salt

Now, on to the possible damage that hygroscopic salts could potentially inflict on your walls. As I mentioned before, these salts rise through the brick and into your properties walls where the water is evaporating out of your walls.

These areas are going to be a lot more open to potential damage and disaster then, as not only are you going to have the damage of damp to deal with, but now the build up of hygroscopic salts. These salts on their own aren’t harmful, but their presence alone indicates a higher risk of danger and damage to your properties walls.

This is because hygroscopic salts are much more likely to be able to absorb the humidity in the air than damp on its own. So, if you find condensation often within your property, or that humidity builds up frequently in your home, then the hygroscopic salt in your wall is much more likely to absorb this moisture, store it, and worsen the damp already existing within your wall.

That’s not the only pitfall here either. If you weren’t already aware, one of the key dangers linked to damp is the growth of black mould. Black mould thrives in the type of moist environments that damp creates. That’s not to say that mould is a product of damp.

Instead, the fungal spores that cause the black mould land on the damp areas of your property, and grow into the festering, nasty black mould spots you will be familiar with. This is a real problem as not only can black mould cause your paint to peel, your wallpaper to rot and your plasterboard to crumble, but the spores released by the black mould will help it multiply and spread – and can even have a harmful effect on your physical health.

So, should your hygroscopic salt build-up be left untreated, and your walls absorb more moisture as a result, you are putting yourself at direct risk of not only having your walls and ceilings taken over by black mould, but also in danger of the potential health problems that come along with that.

So, let’s sum up the extent of the damage that hygroscopic salt build-up can have on your properties walls and ceilings. Increased structural faults, the quality of your walls deteriorating, the decoration of your property either peeling, rotting or crumbling, and of course the added risk of black mould in your property. So how should you deal with hygroscopic salts?

How to Remove Hygroscopic Salts?

So, what should you do if you do find hygroscopic salts within your walls?

The first thing to do is not panic. A company like Timberwise has had a lot of experience in treating damp walls, so know that once you have placed a call to a damp and property care specialist, you are well on your way to having the hygroscopic salt removed from your property.

So, what is the standard procedure in removing hygroscopic salts? Well, as mentioned, you start with a professional survey. Then, the main issue you will face is resolving the source of the water infecting your walls and allowing the salts to rise to the surface.

This is a very important step, with it being highly advised that you do nothing else until the source of your damp has been treated. Now, this could be attributed to a number of different factors. If you have identified signs of rising damp or signs of penetrating damp or that you have such a big build-up of condensation in your property that the moisture is affecting your walls.

Only once you are certain that the source of your damp has been dealt with should you move onto removing the hygroscopic salt entirely. This could mean that you will need to remove and replaster your walls entirely if your plaster has been infested with the salt itself.

However, it is vital that you take this action if needed. The same applies to plasterboard, or any kind of wall covering that has been affected by hygroscopic salts. We are telling you this is important because even if the source of your damp has been treated, you are going to be susceptible to further damp related problems if you don’t remove those hygroscopic salts.

That’s because the salts are still going to be capable of absorbing moisture from the air within your property, bypassing measures like a damp proof course that could have been installed in your property, making it useless.

So, once the source of damp has been treated, it is vital that you remove any affected wall covering or plaster to avoid a concentrated condensation based damp problem remerging.

Of course, all of this starts with a phone call to a specialist. You can rely on us to prove free advice and help you to set up a survey at a time that conveniences you, all so that you can get peace of mind with the removal of hygroscopic salt and damp within your property. Visit our contact page to leave us a message, or call 0800 288 8660 to talk to us today.