Timberwise»Blog»Basement Waterproofing»Why is There Damp in My Basement And What Can I Do About it?

Why is There Damp in My Basement And What Can I Do About it?

If you have a basement that is used for storage or recreational purposes, or if you have even rented it out to someone, then you probably do not want damp and mould to be discovered in that basement. However, it is not uncommon for basements to have little airflow and particularly high moisture content in the air. So, it is more than likely you will have come across dampness and black spot mould on the walls, floors or ceiling at some point.

Getting rid of moisture from your basement can be a particularly tough task, especially if you cannot find the cause of the damp problem.

What Causes Damp in Basements?

Finding the reasons for why there is damp occurring in the basement is essential to knowing how to remove it. Basements are often vulnerable to having leaks, and even the best well-built basements will eventually succumb to some form of wear and tear. We have a list down below for the most common reasons for damp in basements.

Leaks in basements can sometimes occur from damage to the foundation of the building. Natural causes can also be a factor for foundations to start leaking and this is down to the process of hydro-static pressure. If the drain has become clogged then this can also lead to leaks in the basement. If there is moisture in the basement then issues with mould growth will almost certainly occur. 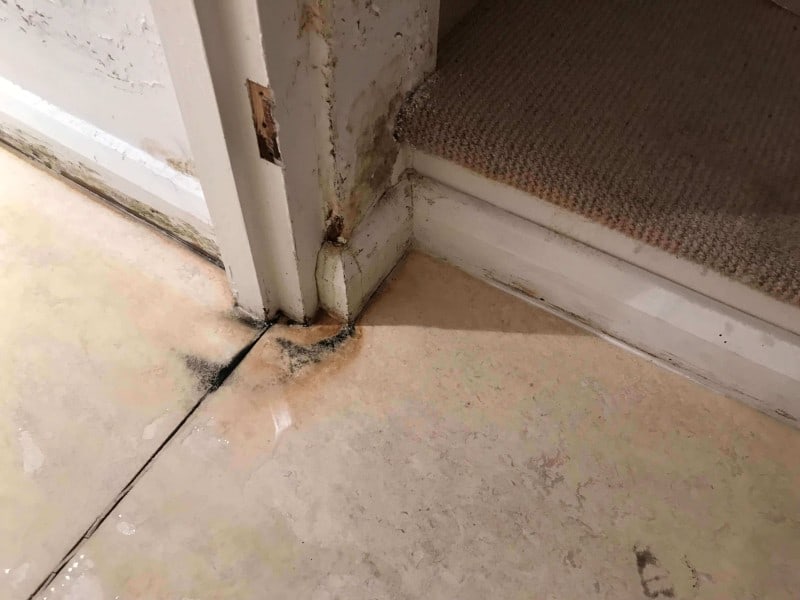 If your basement has been affected by extreme wet weather then flooding could be a problem. Just like having leaks in your basement, having water in the basement can also lead to potential mould problems.

The failure of a sump pump is an issue Timberwise has to treat on a regular basis. The reason why is because a failed sump pump must be treated sooner rather, because it can lead to serious water damage to the basement.

It is not uncommon for basements to be susceptible to having high humidity levels caused by poor airflow. This could be down to a number of factors, including that there may not be any windows or that the basement is completely surrounded by concrete as it is underground.

Poor ventilation goes hand in hand with excess humidity, and moisture and is one of the leading causes of condensation. Basements are prone to condensation issues which can then lead to having mould growth in basements.

How to Remove Damp from Basement?

Now we have explained the reasons why moisture occurs in basements we can now move onto the solutions to removing damp from your basement. The first step to getting rid of damp is to find and stop the source of the moisture problem. If leaks are the cause of the damp problem in the basement, then we would recommend assessing the gutters, roof damage and downpipes and contacting a building contractor to fix the problem.

When flooding is causing damp problems then you will first have to remove the water from your basement and clean the area out. If the sump pump system is not working that this can be fixed by a highly qualified technician.

If there is groundwater that is seeping in from outside of the basement then it is more than likely that there is a tanking problem, and the waterproofing has failed. The cost of having a tanking system installed can be dependent on many factors including the type of condition the basement walls are in.

When the damp problems are only minor then a simple tanking system can be used which involves a damp proof coating to block the water from entering the inside of the basement. When a simple tanking system will not solve the damp problem, a cavity drain membrane should be installed in conjunction with a sump pump system, this will allow the water to be pumped into the drainage system and away from the basement.

Improving the ventilation in your basement is one of the key elements to having a dry basement. To increase the amount of airflow in the basement a positive pressure ventilation system should be considered. You should also make sure that there are plenty of vents installed, where possible, in the areas where there is the most humidity.

Further Advice from a Specialist

For further advice on removing damp or mould from your basement then we have a team of specialists who are hand to sort out any damp problems you may be facing. You can get in touch by contacting us online or calling 0800 288 8660.