Does Bad Pointing Cause Damp?

Damp is an issue that many people wake up to every day – sometimes for the first time, sometimes it’s been there a while, and sometimes occupants might not even know that there is damp in their walls. There are many different causes of damp, and unfortunately, there are also plenty of different myths about damp out there as well. One question that does get asked a lot is ‘does bad pointing cause damp?

By the end of this article, you will have a definitive answer.

There are going to be plenty of people searching the internet looking for potential causes of damp, and coming along with different posts telling them that pointing can cause damp. The thing is, if you aren’t exactly sure what pointing is, you might not fully grasp the relationship between pointing and damp.

Pointing is essentially the term given to the finish that is applied to the mortar that sits between and connects the brickwork on the exterior of a house. This pointing, which is commonly applied during construction, acts as a weatherproof barrier between your masonry and the elements, forming a shield that should protect your mortar (and brickwork) from heavy rain and the potential water damage it can cause. 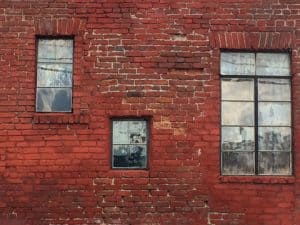 An example of the effects of expired pointing

The pointing itself, as mentioned, is commonly applied during the construction process. If your building is dated pre 1920, then there is a chance that the pointing can be made up of lime, but modern construction methods usually see cement being used instead. If you are unsure, a surveyor will be able to tell you – or just check what year your property was built.

It’s also worth remembering that pointing is never formed out of a completely hard sealed barrier. That’s because it is very important for your properties walls to ‘breath’ to allow humid air to leave via the walls safely, rather than letting humidity build up within the brickwork causing interstitial condensation. Properly applied pointing then won’t just stop damp from entering your brickwork, but will also encourage and allow moist air to leave your property as well.

One factor to consider when it comes to pointing is that it is designed to fail. The very nature of pointing is for it to take the brunt of weathering damage instead of your brick and mortar, so naturally, over time the weathering process will strip away the pointing.

This is to be expected, and in fact, is part of the pointing design. Repointing is supposed to be a planned for and a regular occurrence, scheduled in to make sure that the potentially harmful elements of the weather never have a lasting effect on your property.

How Does Pointing Become Damaged?

As mentioned before, pointing is one element of construction that comes with degradation built in. However, it is not always the case that weathering alone is responsible for all of the damage incurred by the pointing itself.

Obviously, weathering is a very prominent factor when it comes to pointing becoming damaged. Realistically though, this will be an expected process, and in most situations, you can avoid serious lapses in protections with properly scheduled re-applications of pointing.

Another cause of pointing failure can be found in failing, poorly maintained or faulty building elements. Aspects such as guttering, piping, drains and roof tiles all need to be examined properly and regularly to make sure that they aren’t contributing to building degradation.

Take overflowing guttering for example. If your guttering is continually and routinely overflowing, allowing water to overflow down the side of your property then you are probably going to see the pointing fail in the direction of the overspill much quicker than it might on the rest of your property.

That’s because water and rainfall are two of the weathering elements that pointing are designed to absorb. Pointing though isn’t specifically designed to receive a concentrated volume of moisture like you may find spouting from the top of blocked guttering, but an even spread of rainfall. This all means that the overflowing water from the guttering is going to speed up the degradation process of your pointing, and once that pointing is gone you may well have a penetrating damp issue on your hands. 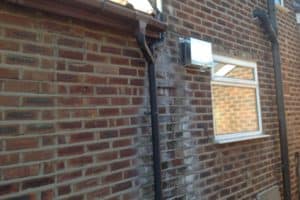 What penetrating damp can do to your walls

Another factor that can speed along the pointing degradation process is the damage that can be incurred by frost and freezing. If, for example, your property is subjected to heavy rain that manages to find its way within your masonry, and then soon after is exposed to cold weather that allows for freezing temperatures, the moisture inside your brickwork is going to freeze.

When any water freezes, it expands, and the knock-on effect here is that the expansion within the brickwork is going to cause that same brickwork to crack. Simply put, the frozen rain in the masonry will cause the bricks to crack, crumble and leave your walls exposed to the mercy of the future effects of weathering.

These types of defects can speed along the degradation of pointing, but most pointing when applied correctly should last you up to fifty years, that is, there are no other factors coming into play during the course of it protecting your building.

Does Bad Pointing Cause Damp?

The question shouldn’t be ‘Does Bad Pointing Cause Damp?’, but rather ‘Can bad pointing lead to damp?’ – to which the answer is definitely yes. If you have exposed brickwork that is no longer protected with the veneer of pointing then it is incredibly likely that future weathering and water damage will affect masonry and brickwork directly at some point. This could then in turn lead to penetrating damp inhabiting and spreading through your property.

So, does bad pointing cause damp? In a sense yes, but only in that bad pointing can allow damp to set in when your walls are unprotected. Be sure to re-apply pointing to your walls within the allotted time frame of your current pointing’s life span. You can do this yourself, or have a professional complete the work for you if it looks like it might take too much time.

Repointing is one of the crucial steps in removing penetrating damp from your property. Penetrating damp is a serious issue that can lead to structural integrity being lost, the development of black mould and the overall loss in quality within your walls.

If you have come across dampness in your walls because of failed pointing, then it’s time to get the experts from Timberwise in to fix your issue. Give us a call today on 0800 288 8860, or fill in a contact form, and we can discuss fixing your damp issues in full.