It’s no understatement to say that rising damp, and damp in general are prolific causes of property decay in the UK. One of the main questions that gets thrown about upon the discovery of rising damp (or even if damp is suspected) is ‘can rising damp damage bricks?’

It makes sense that you would be concerned about your masonry when it comes to damp based property issues. So, if you have ever wondered what the effect on rising damp can be on your brickwork, read on, and you will have a comprehensive picture of how damp poses a threat to your property, and more specifically, your brickwork.

How Does Rising Damp Affect a Building? 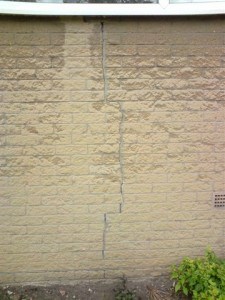 Rising damp is one of the main ways in which damp can infest and damage a property. Just like penetrating damp, rising damp is a factor when the building itself fails, rather than being a product of condensation and peoples living habits.

Rising damp is classified as when moisture rises up through the walls of a property via capillary action. This is the same type of movement that moisture takes when it is soaked into a flannel or a sponge.

This action allows moisture to enter your properties walls at ground level, either through moisture present within the ground under your property that has travelled to the surface, or from moisture that has pooled around the base of your property, allowing it to seep into the bottom of your walls.

In either situation, the moisture will enter your properties brickwork and begin its journey upwards. In most healthy properties, this moisture would come into contact with a preventative measure known as a damp proof course, which in most instances would stop the rising damp in its tracks.

As mentioned though rising damp is caused as a result of a failure within the building itself, and in most cases, it is the failure of the damp proof course.

So, once the moisture has made it past where your damp proof course should be set, or has failed, then it will rise through your walls to the height of about one meter.

This moisture can spread rapidly within your walls, and even being to affect the interior of your property, with the interior damp capable of destroying costly decoration such as plasterboard, paintwork, skirting boards, wallpaper and carpeting in some instances. It can also lead to the development of black mould, which, given the correct interior conditions, could thrive within a property.

That’s the interior of a property though. The story is much the same for the exterior in terms of damage. Mortar joints will easily crumble to the touch if excessive damp has been allowed to permeate the walls, and bricks will also crumble away if they are left facing rising damp for too long.

However, that’s only the start of the problems that rising damp can cause to brickwork.

How Can Rising Damp Damage Brickwork? 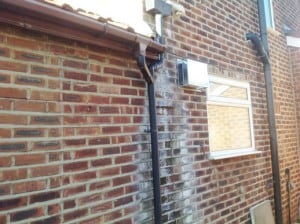 So, if you were looking to the quick answer to ‘Can rising damp damage bricks?’ – The answer is Yes. But instead of stopping there, it’s important you learn just how rising damp can damage your brickwork, and in turn, your whole property.

So, the possibility of crumbling masonry has already been discussed. Rising damp can cause brickwork and mortar to become weak, and fall apart even when people brush their fingers across the masonry itself.

Outside of being costly to repair, the potential dangers of failing masonry are pretty obvious – you could see walls fall into disrepair or even topple entirely thanks to the bricks being unable to fully support the weight required of it anymore.

Problems With Penetrating Damp On Brickwork

But the potential damage does not stop there. Rising damp can cause bricks to not only crumble, but become quite porous. That’s because the moisture already present in the brick itself makes it much easier for additional moisture to make its way into the brickwork, and spread out in the wall. What is being described here is penetrating damp, and rising damp can give way to it if it’s left untreated for long enough.

What you will notice here then is that the dampness on walls will grow, even more of your properties wall space will become damaged and you might even see the damp transfer into other surfaces within your home, affecting elements like timber and ceiling decoration.

Penetrating damp, however, unlike rising damp, has the capacity to spread itself as far as its source allows, meaning that heavy rain (for example) can exacerbate the problem massively.

So, it is not just the brickwork in the path of rising damp that can become damaged, but also any masonry in the surrounding area is at risk thanks to the heightened chance of penetrating damp arising from damp, porous bricks.

What To Do Next?

If you suspect your bricks might be suffering from the influence of rising damp, then it is time to call in the experts. Our locally based surveyors will not only be able to diagnose the type and cause of your damp, but also suggest a solution that our technicians can act on at your instruction. Call 0800 288 8660 or fill in one of our forms to book your damp survey today.