What Is Cavity Wall Tie Failure?

If you own property then you are going to have to be vigilant when it comes to the state and quality of the building you own. In that spirit then, it makes sense for you to understand exactly what is at stake when it comes to your walls, and what it might mean if you are facing a cavity wall tie failure.

What Is a Cavity Wall Tie?

There are several benefits to this, mainly the fact that there is a space made for including insulation, which helps with the reduction of thermal transfer and keeps your interior warm, and also that rainwater will be prevented from entering the interior of a building thanks to that space being created.

Most properties constructed after the 1930’s feature cavity walls, but if you are unsure there is an easy way to tell if you have a solid brick wall, or a cavity wall.

First, a solid brick wall is only going to be as wide as about the width of a single brick. You can check this by looking within doorways and windows for the width of the inner wall.

You might also notice on exterior brickwork that there is a mix of bricks facing both widthways and sideways. These are both quick and easy ways to get an indication of the wall without actually having to drill into the brickwork itself.

If you are checking to see if you have a cavity wall, start by measuring the distance inside a window or doorway, just as you would have done for a solid brick wall. If the thickness is over 20cm, then you may well have a cavity wall on your hands.

You can be sure by drilling into the brickwork from the exterior of the property. If after drilling for about ten centimetres you notice that your drill bit has met a void or empty space, then you have drilled through the exterior of a cavity wall and have found yourself within the cavity.

If you do have a cavity wall, then it’s very likely you will also have cavity wall ties. These cavity wall ties sit between the internal and external walls, within the cavity itself, holding the two walls together. They are usually installed during construction, with each tie being embedded into the mortar at a regular distance.

Normally, a cavity wall has different properties on both the interior and exterior wall. The interior wall for example is the load bearing wall, so what a wall tie can do is pass the stability on to the exterior wall, which allows the walls to hold themselves in place.

You need not worry about factors such as slight ground shift, temperature induced distance fluctuations or even water ingress either, as cavity wall ties are usually designed to factor these in and accommodate them if they should ever crop up.

What Is Cavity Wall Tie Failure? 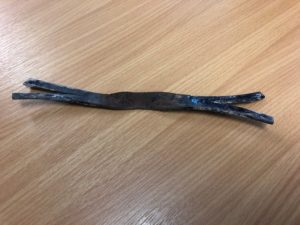 The wall ties that most people will find in the walls of their property are made of a steel that was not designed to stand the test of time well. This steel was typically quite mild, and was usually coated in paint, or was simply painted before being inserted within a wall.

All of this means that the steel itself would be vulnerable to exterior elements, exposed, and therefore susceptible to corrosion. In fact, the Property Care Association have stated that these types of cavity wall ties could corrode and fail within twenty years of their original installation.

This expansion can be quite drastic and could even span several times the size of the original thickness of the wall tie itself. This is problematic because expansion on this scale could entirely compromise your brickwork, causing the actual bricks to separate and become disjointed – which in turn leads to cracks, and an overall reduction in the structural integrity of the property.

If the problem is left alone and the cavity wall tie corrodes entirely, you are going to have a much bigger problem on your hands. This issue could lead to collapsing exterior walls, and reinforcement from new cavity wall ties will be needed urgently.

Another leading cause of cavity wall tie failure is much more straightforward and easier to explain than the scientific process behind steel corrosion and expansion – and it’s down to poor or improper installation when the property was originally constructed.

There are a number of reasons that wall ties might fail from poor construction, including low quality building materials being used, the spacing being off between cavity wall ties, improper installation, or worst of all, not being installed at all.

All of these problems usually lead to the same solution, which is the installation of quality cavity wall ties at the first opportunity to avoid further catastrophic structural failure within the walls of your property.

What Does a Failed Cavity Wall Tie Look Like?

This might seem like a hard question to answer considering that cavity wall ties are usually located between then interior and exterior walls of a property, but realistically, if the problem is bad enough then you may be able to spot signs of cavity wall failure yourself from outside your property.

Otherwise, you will need to engage in the services of a qualified surveyor to understand the state of your cavity wall ties, and what action should be taken if they are in disrepair. 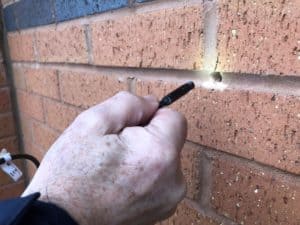 One of the signs you can look out for when it comes to cavity wall tie failure is a bending or ‘bowing’ brick wall. In this situation, the corroded wall ties within the cavity wall have expanded within the brickwork itself. This in turn has forced the masonry ‘off balance’, making the brick wall bend out of shape or ‘bow’. This will be pretty easy to spot, and should be acted upon immediately.

Lintels are a good indication of a broken cavity wall tie as well. A correctly installed and working lintel should always sit at a perfect horizontal angle, as this way the load of the property above it does not press down too hard on either side of the lintel – instead the pressure is distributed equally, as it should be.

So, if a lintel is lifting on one side, or sagging, then you could take that as a sign that the wall is no longer sitting neutral (or flat) at its base. This is a clear sign that the cavity wall ties have failed, and the brickwork has been offset as a result.

You can also look at windows for signs of cavity wall failure as well. The windowsill will give you a clear picture on the state of your cavity wall ties if you check for cracks and uneven brickwork around the window itself.

Why around the window? Because the windowsill, where the bricks are visible at the edges, are structurally vulnerable, and therefore much more susceptible to the cracking and bowing of brickwork typical in properties with broken cavity wall ties.

One of the biggest visual signs of cavity wall failure is cracking within your walls. If cracks are crossing across the masonry itself and the mortar of your walls, then you could well be seeing signs of corroded and rusting wall ties.

As previously explained, the rust on an installed wall tie causes it to expand wherever it is embedded within the brickwork. This unpredicted expansion can cause the mortar to crack, lift or sag, and in turn crack brick work surrounding the wall tie.

All of this has a compounding effect as well, as the cracks within the masonry are going to allow water into the wall itself, building up on the wall tie which only allows for more rust, and further expansion – and the cycle continues.

The very first step to take when it comes to fixing a broken cavity wall tie is to arrange a proper cavity wall tie survey. This is going to highlight the extent of your problem, and what exactly should be done to remedy the issue before it can get any worse. 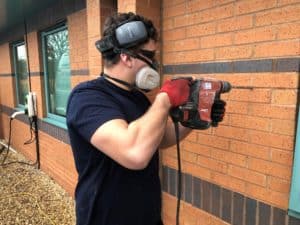 You can read more about the exact process here but following a survey, the usual route is to have cavity wall tie replacement carried out by a qualified professional. The technician will be entirely capable of installing new stainless steel wall ties, in line with current building regulations, will be much more capable of the crucial structural task they have to perform within your property.

Think you could benefit from having a professional assess your property for signs of cavity wall failure? Call 0800 288 8660 or visit our contact page to get in touch with us today, our team of experts are on hand in England, Scotland, and Wales to make sure that your property is seen to swiftly, with concise results that lead to a comprehensive structural solution.