Timberwise»Blog»General»What’s the Difference: Mould Vs Mildew

What’s the Difference: Mould Vs Mildew

It’s a feature of everyday life that we commonly hear phrases and expressions, and, without fully understanding them, we attribute meaning, and continue with a conversation. One great example of this is comprehending and understanding the difference between mould and mildew.

If you have heard the terms on television, or from friends talking you may be aware of the context: a nasty growth that appears in moist environments that is hard to clean.

So, read on for more information on the differences between mould and mildew.

What Are Mould and Mildew? 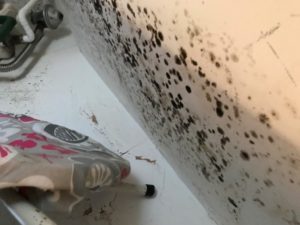 Mould and mildew are actually more alike than you might have initially thought – but they aren’t the same thing. Both of these growths are in fact living organisms that thrive within moist environments.

Realistically, these moist environments are created within a home that is suffering from damp. Damp allows for a moist environment that can provide perfect conditions for the spores that contain mould and mildew to grow. The cause of this damp will vary from property to property, but it could be rising damp, where moisture rises into your properties from the ground below the walls, past failed preventative elements like a damp proof course.

Or, your property could be suffering from penetrating damp, where a failure within the buildings construction has allowed moisture to get into the properties masonry or other building materials. Of course, there is always the possibility that the mould and mildew has managed to work its way into your property thanks to condensation.

So, now you know what causes mould and mildew. How else are they similar?

How Are Mould and Mildew Similar?

We have already established that both mould and mildew are fungal organisms. We can even go a step further – technically mildew is only mould, but a different type of spore than the one that causes black spot mould.

Outside of the fungal family factor, there is another more pressing and urgent similarity between the two – and that is that both mould and mildew are capable of causing physical health issues for anybody who lives in close proximity to them for an extended amount of time.

Now, the detriment to health is noticeably increased when it comes to mould – in comparison to mildew, it’s definitely the bigger worry. Mould can cause all sorts of physical health problems, including leading to the development of asthma, respiratory issues, and more.

Mildew however is more commonly associated with sore throats, headaches, and minor forms of respiratory problems. Either way, these aren’t organisms you want growing within your home.

Of course, another similarity is the nature of these organisms and how they grow. They are both fungi, so the actual mould and mildew aren’t products of damp, but the result of spores that grow within an ideal environment.

This means that as long as the mildew or mould is within your property and growing, they are going to be releasing more spores into the environment, and the growth could be exponential if you don’t act quick.

So, how can you recognise mould, how can you tell the difference between mould and mildew – and what can you do to eradicate it from your home?

How to Tell Black Mould Apart from Mildew? 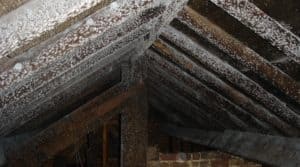 The easiest way to tell the difference between these two spores is by looking at them initially. You are going to find that whilst black spot mould is often raised from the surface it has grown on, and is slimy, growing a small fuzz, and could even be green or discoloured in appearance.

Black mould is going to be accompanied with a stronger smell as well. This smell is going to be easily recognised as it can be overpowering; a damp, nasty smell like washing that hasn’t been allowed to dry properly. You might also notice that black mould is harder to eradicate from your home as it ‘burrows’ and damages your walls, rather than remaining on the surface.

Now, what can make identification a little tricky is that both types of fungus are capable of living in the same environments and on the same natural surfaces – wood, paper, even plasterboard can all play home to these spores, so if you are having trouble telling the difference, don’t be afraid to ask for an experts opinion.

How to Clean Black Mould?

Black mould is a nasty thing, and depending on the infestation, type of spore and how bad the damage is, it can be difficult to remove it from your home. You can always look into specialised cleaning products, but in some cases, it’s going to be much easier to scrap whatever building materials have been ravaged and replace them.

Plasterboard, wallpaper and wood can often be left wrecked after black mould, so don’t be afraid to write it off and start again, as sadly this is the only way in some cases. This is all because black mould has a tendency to ‘burrow’ and destroy as it goes. Luckily, there are specialised kits you can purchase to aid in the removal of black mould.

Our professional mould kits for example are just one way in which to help in the removal of black mould from a property. If you are looking for a professional grade solution to black mould in your home, then our mould kit’s could be just the thing to help clean your property.

In other cases, you may want to involve a specialist black mould cleaner who has experience with the fungus to make treating your property a priority and to save as much material as possible. If expert advice sounds like something you could benefit from, just give us a call and our team will be more than happy to help.

How to Clean Mildew?

Mildew is a different matter altogether. A scrubbing brush, your everyday household cleaning products and a little effort are all that’s needed to properly remove mildew from your property, no need for third parties or PPE at all.

Bear this in mind though. Every time you discover black mould or mildew, it’s indicative of a bigger problem: the presence or potential of damp. Cleaning mildew will only remove it for so long if the conditions that allowed it are allowed to continue – and the same goes for the more destructive black mould.

So, if you do find yourself scrubbing mildew or scrapping plasterboard, add calling Timberwise for a damp survey onto your to do list. Our surveyors won’t just tell you how the mould and damp have come into your property, they can also make recommendations on how to fix the problem and direct our specialists on the further action that needs to be taken.

Just call 0800 288 8660 or get in touch online today, and our team will get right on to helping you eliminate mould and mildew from your property.