Timberwise»Blog»Basement Waterproofing»How to Find the Source of a Water Leak in a Basement?

How to Find the Source of a Water Leak in a Basement?

Your basement springing a leak is not an ideal situation to find yourself in. In fact, any turn of events that leads to your basement becoming a victim to flooding, water damage, damp, and mould is one that is best prevented rather than solved.

To that end, it’s important to be able to identify the actual source of a leak in your basement before it’s too late, and you have serious, water damage-based issues on your hands. So, how do you identify the source of a water leak in a basement?

Determine the Kind of Leak You Are Experiencing

This might be difficult for an inexperienced person to do, so feel free to give us a ring if you have reason to believe that your basement is in the process of suffering from a water leak.

What might make you think you have a leak? Well, the appearance of damp and mould are always sure signs of water damage in your property, and an indication that you could well have a leak causing your problems.

Most people associate dampness with a nasty, dank smell. If you happen to notice an odour within your basement but can’t see any immediate presence of damp in the basement, such as dampness on walls, then it could well be time to investigate further to figure out exactly where the smell is coming from.

If you do have a reason to believe that you have a leak in your basement, it could well be time to call out the experts. But, if you want to investigate yourself where the leak could be located, check out the following options. 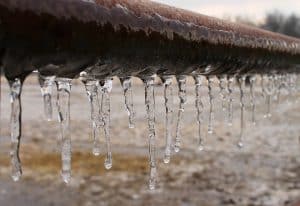 One of the most common causes of leaks in a basement is a simple, leaking pipe. If the pipe is exposed the leak is going to be much easier for you to locate, but commonly fluctuations in temperature, freezing weather, or rusted metal can all cause your pipes to corrode and spring a leak.

As mentioned, if your pipes are exposed it will be easy for you to spot a dripping valve, connection or broken pipe – but if your pipes are located within your walls you might have a more difficult time discovering if they are indeed leaking.

A drop in water pressure, liquid incorrectly draining, or even a lack of water reaching its intended outlet are all potential signs of a burst or leaking pipe.

If you suspect a broken pipe might be to blame for your basement leak, then it’s important to call out a plumber as soon as possible to get to the bottom of your problems, and to contact us if you have water damage that needs repairing. 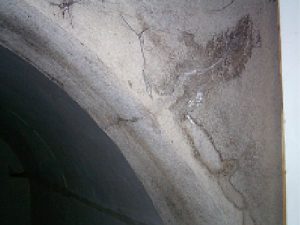 Cracks in the walls of a basement are a cause of leaks that crop up incredibly often. These cracks appear in your walls as a result of either water ingress itself (water making its way through your exterior walls due to the likes of lateral pressure or similar), or they could be the result of imperfectly sealed windows and doors, or even just faults in the masonry itself.

The easiest way to tell if the water leak in your basement is the result of a crack is by waiting for heavy rainfall, and then inspecting your walls and window frames for signs of moisture and water seeping through.

If you find that the water ingress is due to a crack in your wall, it’s time to call out our team of experts to identify what caused the crack, and what can be done to correctly waterproof your basement against the possibility of more leaks and cracks forming in the future. 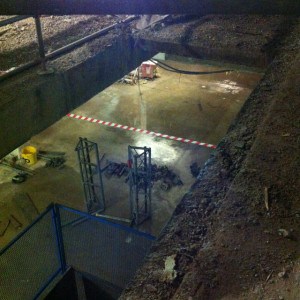 Rainfall is the root cause of almost all basement leaks, so if rainfall is heavy there is a good chance that rainfall could easily seep into your basement through the ground itself.

This can happen in a number of ways. One way is through lateral pressure. Lateral pressure is the process of moisture entering the ground and permeating the soil itself.

This means that the soil is going to absorb the water and expand as a result. Therefore, any soil pressing onto the basement itself is going to press even harder as a result of the addition of that moisture, which could in time (or with the presence of heavy rain) lead to the basement wall itself failing.

Now, it might not take a drastic event like the basement wall itself failing for your basement to experience a leak. It might come down to the common process of penetrating damp to see a leak spring in your basement.

Penetrating damp is the process of a building failure leading to the presence of damp being found in a wall. If damp soil is constantly pushing against your basements wall, it’s only a matter of time before the brick gives in, the masonry fails and the wall itself begins taking on water. From here the problem only gets worse, and you may well notice a leak develop as a result.

In this situation, we can’t stress enough how important it is that you contact us so our experts can either apply, or fix, a cavity drainage membrane waterproofing system in your basement to stop not only the leak, but the water damage as a whole. You can read more about cavity drain membranes, but they are a tested, proven method of keeping basements dry all year round.

Concerned you might have a penetrating damp problem borne out of lateral pressure? Consider using our services to have a survey completed on your basement, outlining exactly what kind of measures are needed to safeguard your basement against water damage. 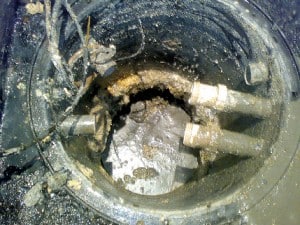 A sump pump is a vital part of a basement waterproofing system, crucial for its ability to channel water, that would otherwise leak and flood throughout your basement, away from your property safely into the correct sewage system or natural safe depository.

If a problem were to occur with your sump pump then the results could be disastrous. Your sump pump might not flush away the collected floodwater as needed, meaning that an overflow could easily occur.

This of course means your basement floor will eventually become covered in water, how much water will depend on the amount of water building up in the pump and how long you leave the basement unchecked for.

In some situations, you might notice that your sump pump has broken down. Perhaps during heavier periods of rainfall, you won’t be able to hear it working, or you might notice a smell of stagnant water building up over time.

These examples are fairly easy to catch before the leak becomes a real problem and splashes out onto your basement floor – but it might well be the case that you don’t recognise a sump pump failure when you see it.

For example, the discharge valve or pipe on the pump might become blocked. In this instance, water might start leaking into your basement from the floor at a distance from the sump pump itself. You would be forgiven in this instance for not recognising a fault in your sump pump system – but the problem won’t be fixed until the pump has been seen to.

Believe it or not, there are positives to this particular instance of a basement water leak. Mainly, that a faulty sump pump should be relatively easy to diagnose and repair if attended to by a trained sump pump engineer.

The main thing to remember is that if you determine the leak in your basement to be due to a sump pump failure that you call out the experts immediately. 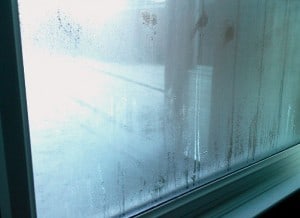 The fact remains that condensation, though you might not consider it a leak, could be a key factor in the presence of moisture within your basement.

If you have noticed all of the tell-tale signs of damp but can’t discover the actual point through which water could be entering your basement then there is a strong possibility that condensation is the culprit of your water ingress.

Condensation is created just through your everyday life. It’s formed when moisture in the air turns from its gaseous state into liquid when the warm, moisture-laden air comes into contact with a cooler surface.

So, if you have (for example) a tumble dryer in your basement, and you are noticing that you have a damp patch or dripping water on your basement’s walls or ceilings following its use, it could well be the case that your basement simply doesn’t have the adequate ventilation to help keep it moisture free.

If you cannot find a reason that your basement might be experiencing a leak, yet still consistently notice all the signs of damp and water ingress, then it could well be worth exploring the notion that you are suffering from a condensation-based problem.

Our experts are on hand to provide a comprehensive condensation survey, which will not only ascertain whether or not your basement is falling victim to condensation, but also the reason behind the condensation build up and what you can do to stop it from having a severe effect on your home in the future.

Remedying Your Basement of Leaks

In many of the cases we have outlined here, Timberwise is going to be more than capable of helping you not only with the cause but also with any fallout from any potential leaks you might have suffered. Give us a call on 0800 288 8660, or get in touch online to learn more about our services.

If you believe that your sump pump is responsible for your basement suffering from a leak, then don’t hesitate to call our associates at The Basement Sump and Pump Company.

You can rest assured that the team at the Basement Sump and Pump Company are able to not only repair your sump pump, but also safeguard it against failing again in the future through a system of planned maintenance.