Timberwise»Blog»General»Can You Paint Over Mould?

Can You Paint Over Mould?

Should You Paint Over Mould? 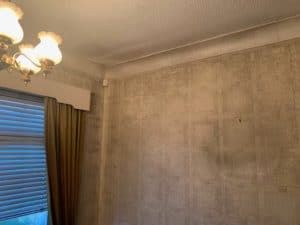 No. Mould isn’t a feature that can just be painted over and forgotten about like a scuff or other mark on a wall you might create by accident.

Mould is a living organism. It’s created once damp has set into your property. In this instance we are talking about painting over mould, so let’s assume the damp is in a wall. The damp will set in your wall due to one of three reasons.

The second reason that damp could have set into a wall is due to penetrating damp. Just like rising damp, penetrating damp is created via a fault in the building materials in your property.

This could be something like your pointing failing on the exterior masonry allowing moisture into the brickwork itself, it could be a constant overflowing gutter causing a persistent stream of water at one point of your house, which in turn soaks into your properties walls.

Essentially, any untreated form of building defect that allows water into your walls is going to cause penetrating damp – and that damp is only going to remain for as long as the defect is unfixed.

The third way in which damp could set into a wall is through condensation. Condensation is a product of everyday life, and if left unchecked it can easily cause a lasting damp problem to form in a properties walls.

Again, this form of damp will persist in your walls until action is taken in the form of reducing the amount of condensation being created, taking steps like increasing ventilation and installing extractor fans.

So, why is damp important when it comes to black mould?

Because black mould is at it’s core a fungus that thrives in the exact environments created by damp. So, you could theoretically clean all of the black mould away from a wall (it may take some effort), but if that damp isn’t taken care of the same spores that caused black mould to grow in the first place will come back, land on the damp and grow again.

By the same token if you just paint over black mould, you aren’t actually solving any problems. If anything, you are wasting money. The damp will seep through the new paint, the mould will spread, and now you have paid for paint that’s been rendered useless and to boot, your black mould issue is still at hand.

How to Paint Over Mould and Damp?

First off, you are going to want to get the source of your damp surveyed and treated. If that means the likes of a damp proof course being fitted or treatment and repairs being made to your property, then so be it. If the issue is condensation then take onboard the advice that the surveyor provides, and reduce the amount of condensation you are creating

Without these kind of treatments, your problem isn’t going anywhere at all. Mould is fungus, and its going to keep getting drawn back to moist, humid environments.

So, first off, make sure your damp issues have been remedied entirely. Then, you must assess if the damage that the black mould and damp has done to your walls warrants any further repair. Usually, black mould lands on the surface of a wall, and spreads outwards.

This means that wallpaper and paint itself are often the first points of contact for black mould, and as a result, are often ruined by the mould beyond a point where cleaning is a possibility.  So, you may have to replace plasterboard, lining paper, or other elements which might have become riddled with black mould.

That isn’t to say that black mould cannot be cleaned. If you believe that your décor can be salvaged, then you can look into the use of a mould removal kit. With the right application, these kits can be vital in the removal of mould from your walls.

Once the surface you are looking to paint on has been made free of the damp and mould issues plaguing it, then you will be free to apply a new coat of paint without the worry of black mould re-appearing due to damp.

When it comes to black mould removal and re-decorating, you want to be sure that the actions your take are not only decisive but permanent and safe for your property.

Contact our team of property care experts for a range of services including damp surveys, mould surveys and damp treatment to restore your property to a point where it can be decorated safely, and with minimal chance of the same black mould re-appearing.