Basement waterproofing for a communal area in an apartment block

Found in the northern reaches of England, the Lake District is one of the UK’s most-loved National Parks. The towns of Windermere and Bowness are at the heart of the Lake District and have been popular attractions for visitors since Victorian times.

Mountain Ash Court is a block of high-spec apartments located in a sought after location at the edge of Windermere village. The apartments were developed in 2006, on the site of a former Victorian hotel, by well-regarded national developers Charles Church.

The Mountain Ash Court development featured a wheelie bin store that was built underneath the apartments allowing easy access for residents to place their waste items.  The walls of the store were built directly into the ground with insufficient waterproofing to the structure. Upon completion of the development, the residents found there was pooling water entering the bin store making it impossible to place their waste into the bins inside the storeroom without standing in water that had collected.

The residents were seeking a permanent solution to the pooling water in the bin store. This would require an internal dewatering system designing to prevent the ingress of water entering the bin store from the walls and wall-floor junction. At the time our Waterproofing Specialist visited there was no standing water present however, there was visible evidence due to lime markings to the walls to allow our Waterproofing Specialist to gauge the severity of the problem.

The Lake District region was named as the Lake District National Park on May 9, 1951. With 15.8 million yearly visitors, it is the most visited national park in the country.

All the wheelie bins and bottle bins were removed from the area and any excess cement was then removed from the walls to create a smooth surface. The Timberwise Technicians on-site then created a shallow floor rebate to allow a perimeter drainage channel to be installed around the footprint of the bin store. The drainage channel efficiently disperses water around the perimeter of the bin store and water is then dispersed to a drain off point externally.

Two coats of Kiesol lime treatments were also applied to the walls and perimeter channel. This environmentally friendly liquid is water repelling and capillary narrowing, thus preventing lime leaching from the walls and floor and potentially blocking the drainage system.

The client also required a clean and robust wall finish which would withstand the impact of wheely bins.  We proposed and installed white PVC panels to the walls which act as a moisture and water barrier, creating a cavity between these panels and the solid walls allowing water to flow into the channels at their base. The panels give a clean surface that can be easily washed down to stop the build-up of bacteria, perfect for a communal bin store.

The finished house now provides the owners, and their guests, with a very comfortable and dry “home from home” whenever they visit 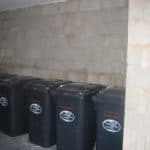 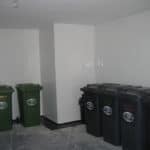 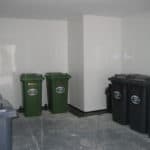 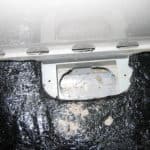 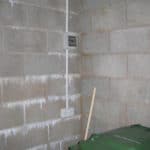 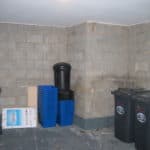 The occupants were left with a dry bin store area as a result of the installation of a  robust waterproofing solution. The residents were delighted with the speed of the process as they required a timely installation due to the building still being occupied during the time the system was installed. Timberwise Technicians were able to carry out the works quickly and efficiently keeping disruption times down to a couple of hours at most.

You can trust our Timberwise team in the South Hams area to provide you with the right waterproofing solution to damp problems in your building. Don’t hesitate to contact Timberwise by calling on 0800 288 8660 or you can request a survey.

A waterproofing survey through Timberwise will be able to identify the extent of the problem and determine the right waterproofing solution for you and your property.