Overview of the Historic Lewis’s Building

Timberwise Liverpool basement waterproofing experts were called out to the historic Lewis’s building in Liverpool city centre, to carry out a waterproofing survey and create a robust waterproofing solution to protect the structure from water ingress. The property is a large Grade II listed building and is one of Liverpool’s most iconic landmark buildings situated on the corner of Renshaw Street and Ranelagh Street. However, the property had remained derelict for many years and was due to undergo a comprehensive redevelopment as part of the £160m “Central Village” regeneration scheme.

The property had already undergone part renovation to the internal walls as well as having staircases, lifts and doors installed at varying levels. In parts, render was applied to the walls to protect them; however, this had become cracked and delaminated over time and as a result, mould had started to develop. Overall, the floors and wall floor junctions were damp and showing evidence of moisture; this suggested that water was entering the basement during times of heavy rainfall, therefore increasing water levels within the basement.

The building burnt down in a fire in 1886, and was heavily bombed in World War II. It was rebuilt each time and was refurbished for the final time in 1957. This version included the statue ‘Liverpool Resurgent’.

The property is Grade II listed and as such this limited the waterproofing design away from more permanent waterproofing protection to a removable one. A waterproof render system was considered to cope with the water pressure from the walls only, however, the concern that the likely pressure of water to the walls and floors, particularly to the basement cause issues with the structure in the future. The preparation required to the walls for a rendering system, particularly where oil and loose wall mortar is present, is likely to hinder a rendering system. The walls throughout are made of mixed standards and finishes, with many protrusions and preparation of these before waterproofing should also be considered. 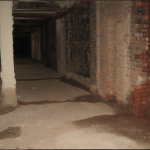 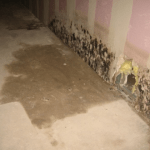 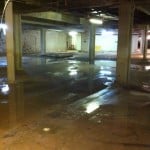 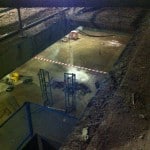 Our waterproofing specialists in Liverpool designed a system by the current British Standard – BS8102:2009 “The Code of Practice for Protection of below Ground Structures Against Water from the Ground”. As the strength of the floor was unknown, Timberwise experts proposed the installation of a water management system in the form of a cavity drainage system.

Within the basement there appears to be a series of below basement drainages and manholes. We recommended installing land drainage with a one-way valve to prevent issues with backing up.

The installation of a cavity drainage system, starting on the walls suffering from ingress to the ground floor, leading through to the lower ground floor and channeling any dampness, water ingress or vapour through the floor to a further system to the basement level.

Now complete, the basement benefits from a solution in accordance with the requirements of the BS 8102:2009 – Code of practice for protection of below ground structures against water from the ground – the highest recognised standard of waterproofing protection, all whilst providing exceptional standards of durability and reliability.

Work began on Lewis’s building after the iconic department store closed and the famous building was cut in two. Now referred to as “The Department”, the building provides 75,000 sq. ft. offices which are arranged over ground and 5 upper floors. The building benefits from a newly formed 8 storey atrium and reception area with direct access of Renshaw Street.