Set in a side street within the ever-popular and sought after location of Penylan near Cardiff lies a Victorian mid-terraced property. The home possesses many features many beautiful architectural features so prevalent in the height of the Victorian property boom such as bay windows, slate roofs, patterns in the brickwork made from coloured bricks and a roof made of Welsh slate. Timberwise Wales was called upon to inspect the property as well as the neighbouring terrace house to determine the presence and extent of problems associated with Fungal Decay.

Dry rot can affect all kinds of timber and this form of timber decay is increasingly a widespread concern for homeowners across the United Kingdom. If the dry rot problem isn’t diagnosed correctly, or even at all, or treated promptly then dry rot can become a danger to you and your home.

There are over 600 castles in Wales. That’s more castles per square mile than any other country in the world. Chepstow Castle is Wales’ oldest surviving post-Roman castle. Located above cliffs on the River Wye, construction began in 1067.

As was the norm when the properties in question were constructed, there is a subfloor void which was vented both front and back with terracotta airbricks which were necessary to allow for a free flow of air under the floor, to keep the temperature content at ambient levels. Over time the original terracotta air bricks should be replaced with modern designs, if they are not kept clean to allow for the free flow of air then effectively you get stale and stagnant air within the subfloor void which can lead to sufficient condensation levels for the timbers to become wet and the germination of dry rot (Serpula lacrymans), from omnipresent spores, is facilitated.

Within both properties, the blocked airbricks were exacerbated by the growth externally of various shrubs and ivy which further induced moisture into the subfloor void. As a consequence, there was a severe outbreak dry rot to all of the floor timbers in the front room together with the associated floorboards, skirtings architraves and other decorative panels.

In order to eradicate the dry rot outbreak, Timberwise Operatives had to take a very risk of verse approach and ensure that both the immediate source of the problem was eliminated but also put steps in place to ensure the property was protected for the future. It was recommended to the client that all infected timbers were removed and replaced, Timberwise would also improve the subfloor void airflow with additional air bricks and insert a new chemical damp proof course to eliminate any rising damp that could further wet the existing timbers. 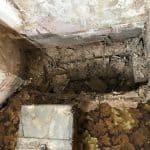 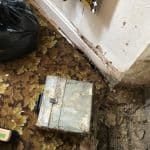 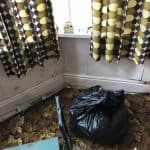 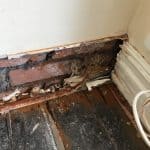 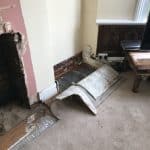 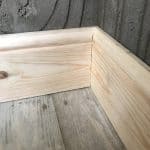 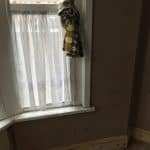 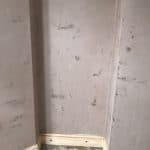 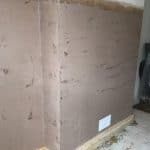 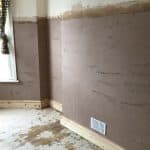 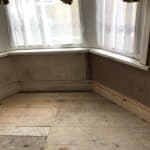 The situation is not uncommon and all too often the blocking of bricks or poor maintenance of buildings can lead to such serious matters, however we are pleased to have been able to have given such an architecturally pretty building a new and safe lease of life

Whilst dry rot does not strip nutrients from brickwork or masonry, viable spores or dormant vegetative growth within the structure can act as a source of re-infestation unless eradicated. The masonry in all of the affected areas was sprayed and sterilised using a fungicide spray and where necessary the drilling and irrigation of the brickwork ensure all of the dry rot strands had been neutralised.

A high penetration fungicidal paste was also used on the new joist ends to ensure that they were as well protected as possible together with the insertion of a DPC barrier between the timber and the masonry to avoid any potential further cross-contamination. In such situations to ensure that all of the dry rot has been sufficiently removed it is necessary to go 500 mm beyond the last sign of an attack to ensure there is no possibility of leaving any infected timbers in place.

Due to the nature of the property, the skirtings, architraves, and other decorative panels were original Victorian features and as a result, were not all immediately available from the traditional merchant source and therefore in some cases, new joinery had to be specially made using the old infected timber as a pattern.

Timberwise effectively replaced all of the floor timber and associated components whilst at the same time ensuring the walls were suitably cleared of any remaining dry rot by the use of a fungal side fluid and together with the insertion of new airbricks we maintained a healthy and consistent subfloor airflow which is necessary for the well-being of the property in the future. For all homeowners involved the dry rot and damp proofing treatments are issued with a long-term guarantee, in this case, 20 years.

Speak To Our Dry Rot Specialists

Timberwise fully appreciates it is imperative that all areas of dampness are identified as timbers within these areas will be at risk to rot developing if such timbers are not fully protected from either the moisture or the rot itself. We are also aware that where dampness is identified and where there may be hidden timbers these may have already rotted. However, previously decayed wood where rot is now dead may sometimes be found in areas that have dried out and if structurally sound or of no importance these may be left provided they can be maintained dry.

If you are concerned about the possibility of a dry rot outbreak in your property, do not hesitate to give Timberwise a call on 0800 288 8660, or alternatively, you can request a survey. By having a dry rot survey through Timberwise will be able to identify the full extent of the problem and determine whether further dry rot treatments are necessary.