Castle Cary is a picturesque market town nestled in the tranquil South Somerset countryside and within its rural surroundings, lies St.Johns Priory. The Grade 2 listed property dates back to 1877, and it was originally designed by Charles Bell.

In World War II American Forces occupied the Priory, then it became the convent home of the Sisters of Jesus Crucified who inhabited the building until 1997. Having since fallen into disrepair, Carlson Homes were granted permission to transform the property into luxurious apartments, with the aim of retaining as many of the original period features as possible.

Before the extensive renovation to restore the building into its former glory could begin, Carlson Homes needed a commercial timber and damp report carried out by a PCA approved property preservation specialist to determine the presence, and extent, of problems associated with Dry rot.

Timberwise visited St.Johns Priory on two separate occasions in order to gain a better understanding of the site, the defects and the client’s expectations. It was this attention to detail that meant Timberwise were awarded the works, despite a further report being carried out by a third party.

The client knew the works would not be given based on price, demonstrating experience is invaluable and they were confident in Timberwise’s 50 years of property preservation expertise. Dry rot spores are omnipresent and will germinate when the timber onto which they have settled reaches a certain moisture content, which is commonly accepted as being anything above 20%.

Once the spores have germinated, the mycelium strands will travel through brickwork and carry on to extreme distances in search of new timber from which to gain its food source. The dry rot then strips all of the nutrients and structural integrity from the timber, leaving it in a brittle like state with linear cracking referred to as cuboidal cracking.

Dry rot is often underrated and misunderstood and you can never be too cautious in dealing with an outbreak. All affected timber must be removed, brickwork sterilised and any new timber installed within a previous dry rot affected area must be both treated and isolated from contact with any previous area of outbreak.

It will track in every conceivable direction, even passing through a party wall between terraced or semi-detached properties and it must be dealt with thoroughly, and by experts to understand exactly what is required by way of treatment, and in particular what to be mindful of as new timbers are replaced.

There have been reports of properties that have been empty and left alone for a substantial period of time, but at the same time been poorly maintained whereby dry rot has taken hold primarily from a leak in the roof or something similar, and effectively destroyed all of the timbers on both the first and second floor including the staircase and all decorative timber mouldings.

Dry rot holds no prisoners, no matter how historical or beloved the property is, and this was a challenging exercise, however, our diligent work on site allowed St.Johns Priory to become lovingly restored and intertwine its historical architecture with modern-day living 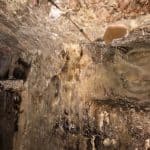 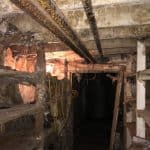 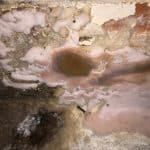 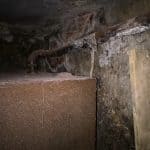 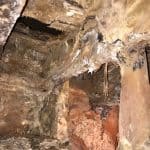 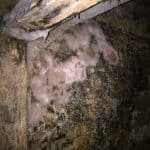 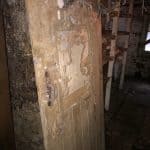 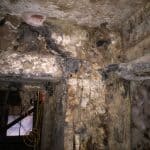 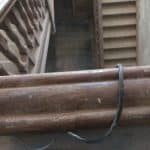 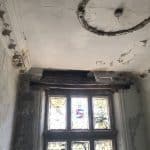 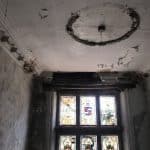 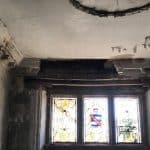 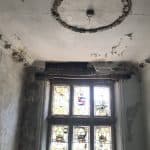 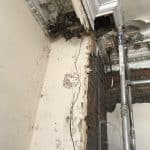 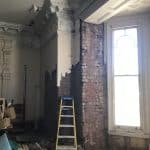 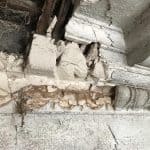 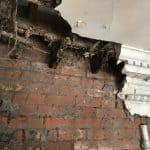 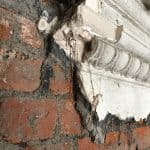 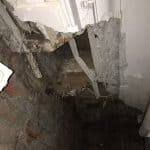 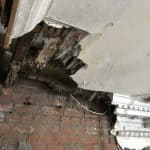 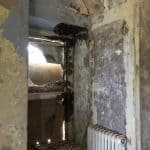 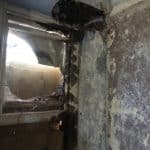 Respectful of the building’s architectural integrity, an exploratory exposure survey was carried out. Having stood dormant and boarded up to avoid trespassers, there was no airflow within the property. It was confirmed that this, along with defective rainwater goods, had led to a confirmed extensive dry rot outbreak.

It was recommended that the remedial works be carried out over three phases:

Firstly before Timberwise Operatives could start work on the building the defective rainwater goods that were responsible for the water ingress were removed, as were the boarded-up windows to allow for the free flow of air. Typical of its construction and period the St.Johns Priory had extensive internal timbers forming decorative architraves, covings and doorframes.

Timberwise Operatives were then able to remove all affected timbers within a distance of 1m from the last sign of from the Dry rot outbreak, this then ensured that all areas affected had been adequately ascertained. This was a collaborative effort alongside the client’s labouring team, a more cost-effective approach for the client rather than have two or three Dry rot experts undertaking the ‘labour only’ role. Click the following the link to identify what dry rot looks like.

As well as removing all affected timbers it was vital that all fruiting bodies and large fungal growths created by Dry rot were removed. It was essential this was carried out with precision to stop them exploding and giving off millions of tiny brown spores looking to germinate on previously unaffected timbers.

The first course of high strength fungicidal spray treatment was applied to all affected and accessible areas, this was then left for a week to dry. Within the priory there were other major refurbishment works going on, Timberwise worked closely in conjunction with other contractors to highlight all of the necessary timbers that needed replacing.

The fungicidal spray is designed to penetrate deep into the masonry, the biocide then targets the fungus, kills it, and ultimately stops it from spreading. By leaving the spray to settle for a week, this allows sufficient time to revisit and see if any regrowth of fruiting bodies or mycelium has occurred thereby ensuring that these could be adequately dealt with using environmentally friendly fungicidal treatments, and ensuring that once the property was renovated there was no potential for a further Dry rot outbreak.

During the course of the extensive sterilisation works our trained Surveyor was on site regularly to check there was no evidence of regrowth, with no new outbreaks present the second coat of spray treatment was applied.

Speak To Our Dry Rot Specialists

Timberwise fully appreciates it is imperative that all areas of dampness are identified as timbers within these areas will be at risk to rot developing if such timbers are not fully protected from either the moisture or the rot itself. We are also aware that where dampness is identified and where there may be hidden timbers these may have already rotted.

However, previously decayed wood where rot is now dead may sometimes be found in areas that have dried out and if structurally sound or of no importance these may be left provided they can be maintained dry.

If you are concerned about the possibility of a rot outbreak in your property, do not hesitate to give Timberwise a call on 0800 288 8660, or alternatively, you can request a survey

By having a dry rot survey through Timberwise will be able to identify the full extent of the problem and determine whether further dry rot treatments are necessary.