Dry Rot treatment at a church in Devon

Sidmouth is a town that lies on the South West Jurassic Coast, which is dominated by the vivid red sandstone cliffs which date back to the Triassic period. The church of St Francis in the parish of Woolbrook, Sidmouth and has been here since the 1930s.

Whilst carrying out that dry rot remedial works within the flat adjacent to the chapel, Timberwise discovered the dry rot had spread over significant distances to find a new food source. The dry rot had infected the chapel itself.

A further survey was carried out on the chapel roof which had a barrel vaulted ceiling, this is formed from principal timbers and then supported by stone. Our specialist team identified dry rot within the roof structure of the chapel. The opportunity was taken to erect a scaffold tower to gain access to inspect the main roof area of the chapel further. A small amount of the close boarded timber was also stripped to determine the outbreak had continued behind the roof structure.

The Jurassic Coast is a 95 mile stretch of the south coast from Exmouth in East Devon to Studland in Dorset. The name comes from the best known of the geological periods found within it including rocks from the Triassic, Jurassic and Cretaceous periods.

In addition, smaller secondary timbers between the principal curved sections were also inspected. This attack had affected the first two principal timbers towards the rear left corner of the chapel as well as affecting the secondary, curved timbers. 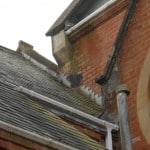 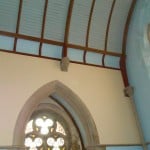 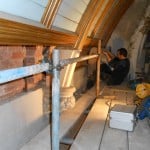 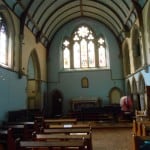 There was no evidence of the dry rot attack affecting the mainframe timbers, purlins or rafters of the main roof structure of the chapel, although dry rot was present within the exposed brickwork of the external wall. Significant water ingress into these areas was evident as there was evidence on the plaster finish of deterioration and salt contamination.

Whilst carrying out the external inspection numerous defects within the roof and flashings could be seen. Also, the size of the guttering used on the main roof was a concern as from the ground inspection, it was clear that ordinary domestic capacity guttering had been used but due to the pitch and size of the roof area, a much bigger gutter was needed to contain the flow of water.

As a result, during periods of heavy rainfall rainwater was overflowing from the gutter resulting in staining on the external wall directly below the guttering and causing penetrating damp issues within the property. To ease this problem, it was suggested that larger size rainwater goods be employed that could handle increased amounts of water.

To remediate the dry rot outbreak, all defective timbers were replaced with pre-treated replacement timbers that matched the European Oak timbers previously used. All exposed masonry was cleaned down and treated with fungicidal fluid, any timbers exposed were also treated with fungicidal fluid within the main roof structure. In addition, all defected plaster on the rear walls of the chapel was removed. To effectively keep the church safe from this type of problem reoccurring in the future a  damp proof render system was installed to keep the walls of the church free from water ingress.

The customer was delighted with the end result, they were especially pleased that Timberwise carried out the works in the agreed timescales. This meant the church could resume normal working day practices sooner rather than later. Timberwise also provided insurance underwritten guarantees for the work carried out, covering materials used and all aspects of the work and any possible damage.

Get In Touch To Our Dry Rot Treatment Specialists

Timberwise fully appreciates it is imperative that all areas of dampness are identified as timbers within these areas will be at risk to rot developing if such timbers are not fully protected from either the moisture or the rot itself.

If you are concerned about the possibility of a dry rot outbreak in your property, do not hesitate to give our team of dry rot specialists a call on 0800 288 8660, or alternatively, you can request a survey. By having a dry rot survey through Timberwise will be able to identify the full extent of the problem and determine whether further dry rot treatments are necessary.

For further information about dry rot click the following links: