Newcastle upon Tyne, commonly known as Newcastle, is a city in the North East of England. A city bursting with buildings of an eclectic mix period from Roman to postmodernist, Newcastle is a place of rich architectural heritage.

Based in the heart of the city of Newcastle upon Tyne the Mining Institute (or to give it its full title The North of England Institute of Mining and Mechanical Engineers) is one of the hidden gems of the city. The Mining Institute has globally important collections relating to the history of coal mining, the development of the railways, geology as well as information on the future use of coal. All this wealth of information housed within Neville Hall – an amazing grade 2 listed property that truly is an architectural gem in Newcastle. Neville Hall boasts an outstanding Victorian library amongst other historically important treasures.

When the institute suspected that the building may have issues with fungal decay (in the form of dry rot) and woodworm they called upon the expertise of Timberwise Newcastle to provide an in-depth timber and damp survey, as well a specify the treatments needed to keep the building decay-free for future generations to enjoy.

Opening in 1850 by Queen Victoria, Newcastle Central Station was the first covered train station in the world. Before opening, passengers had to brave the elements whilst waiting for their train. The station is today one of only nine Grade I listed railway stations in the UK

The survey of the property started with initial observations of the outside. On the gable elevation, a large gap was visible where the adjacent railway bridge and Neville Hall met. This gap was allowing moisture to pass into the fabric of the building and over time would lead to spoiling and damage to internal finishes and decoration.

The roof voids were accessible through a hatch located on the main landing. The Inspection of the available timbers revealed no visual evidence of infestation or fungal decay. Some of the timbers were noted to be water stained; this was due to moisture penetration as a result of defective roof coverings and flashings. If left ignored, this could have resulted in excessive moisture content in timbers within the roof void, sufficient to permit the germination of wood-destroying fungi spores.

There was evidence of salt-contaminated plaster however this had been removed rainwater ingress and floorboards had been lifted to allow for an inspection of the floor joists. There was no evidence of infestation or decay noted however; it was noted that there was some form of root growth to the exposed masonry.

Floorboards had been lifted in a few locations to allow for inspection and there was no evidence of decay or infestation to the accessible timbers inspected.

The plaster had been removed from the wall and ceiling to expose the concealed timbers. There was no evidence of decay or infestation to the accessible timbers inspected. Floorboards had been lifted to allow an inspection of the floor joists, it was here fungal decay specifically wet rot Coniophoria Puteana was noted to the joists. 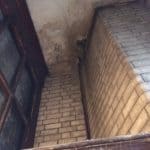 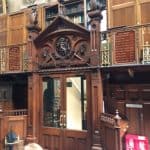 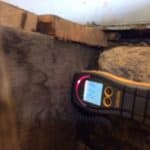 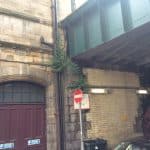 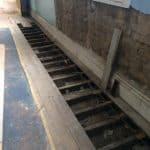 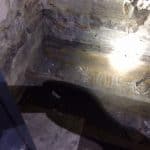 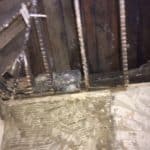 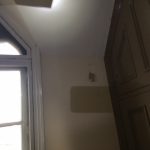 Prior to Timberwise’s arrival, the client was responsible o the removal of any fixtures, floor coverings, plumbing, electrical fittings and any other stored items including personal possessions.

Prior to Timberwise Operatives arriving onsite, the suspended ceiling was removed to allow access for treatment. Timberwise technicians installed a “toxic box”, holes were formed at 450mm staggered centres to the periphery of the walls and to a band around any opening in walls in excess of 150mm thickness, fungicidal treatment was then applied to each hole together with a surface application to the perimeter of the walls. The exposed roof timbers will also be treated with Fungicidal Fluid.

Timberwise Operatives were removed all affected timbers within a distance of 500mm from the last sign of dry rot outbreak, this then ensured that all areas affected had been adequately ascertained.

As well as removing all affected timbers it was vital that all fruiting bodies and large fungal growths created by dry rot were removed. It was essential this was carried out with precision to stop them exploding and giving off millions of tiny brown spores looking to germinate on previously unaffected timbers. New joist ends were attached, these joists were protected with fungicidal paste and physically isolated from contact with masonry.

We truly understand heritage buildings and how they should be preserved without damaging their character and historic merit. We’re happy to have applied our experience and knowledge in preserving one of the oldest buildings in Newcastle.

The finished work by the team at Timberwise Newcastle left the property free of dry rot and left this historically important building structurally sound for future generations to enjoy.

By using Timberwise, the largest privately owned British national preservation company, the customer automatically benefitted from the high-quality service and value associated with the past five decades of Timberwise work.

With the Timberwise long term guarantee covering the work the client, they have complete peace of mind that the property is cared for long after the development is complete.

Get In Touch With a Dry Rot Specialist

If you have a property and you suspect that you may have an outbreak of dry rot help is at hand. Contact our team of dry rot specialists on 0800 288 8660 for further help and advice.