Putting a home buyer’s mind to rest on the famous Welsh Row, Nantwich

Further down from Northwich and Middlewich, lies the most southern of the Cheshire salt towns, Nantwich. Described by Nikolaus Pevsner as “the best street of Nantwich”, Welsh Row has a high concentration of historic Georgian buildings with many of them being Grade II listed, tracing their roots back to the vibrant history of the pre-Victorian extraction of salt for which Cheshire is famous for.

Timberwise were contacted by concerned home buyers who in the midst of purchasing a traditional cottage on Welsh Row, they needed a pre-purchase timber and damp survey to ensure that there were no hidden problems with the property.

Nantwich burned to the ground in 1583, and most of the town was destroyed.  The Queen’s Aid house in the town centre gives thanks to Elizabeth I for helping to rebuild the town after the fire.  An inscription reads:- God grant our Royal Queen, In England long to reign, For she has put her helping hand, To build this town again.

Timberwise Surveyor Sarah Haslam was concerned with the rear elevation of the property, this had been rendered and the render had been taken directly down to the patio which effectively allows moisture to trickle directly up into the render and through into the property.

Any such render should be stopped short of the ground by approximately 20 mm and have what is termed as a “bell cast bottom” to allow water to run down the elevation onto the ground but away from the property that without causing any damage. An intense amount of vegetation, especially climbing vine, was growing directly against the property, as a consequence, this allows more water to be held within the plant which ultimately, depending upon the quality of the mortar, would allow water to trickle through directly into the property.

Present were two airbricks at the ground level giving airflow to the subfloor void of the property, however, these were blocked. These were also too small and there were not enough airbricks present, so would need replacing with a larger number of modern style airbricks.

Purchasing a new home can be a stressful time, so it is always a pleasure making the process easier for homebuyers, by providing an honest and unbiased opinion on the future integrity of their investment

As a consequence of the lack of airflow within the property (based on the inadequate number of airbricks), large patches of black spot mould had built up. The property was built with a below-ground cellar, previously used as a coal store, the walls were not in any way waterproofed and again this was allowing water to penetrate the subfloor of the property.

Sarah also noted evidence of a previous damp proofing course (DPC) installation and recommended that the client investigate further as to the age of the work and whether a guarantee of works existed with the original installers in order to determine whether if it is defective and required any remediation works. 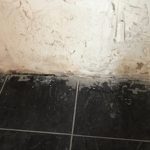 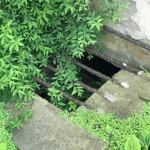 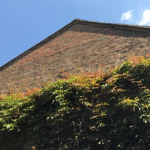 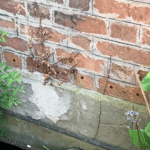 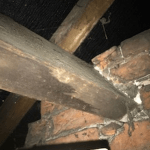 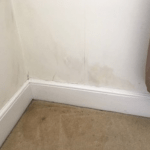 Internally, there had been a previous beetle infestation as well as historical issues with Wet rot and, due to the lack of airflow, the current timbers within both the basement of the property and the roof void were at serious risk of further beetle infestation.

It was recommended, as a precautionary measure, that the timber undertook spray treatments to all of the exposed timbers and that the number of subfloor air vents were increased to ensure a free-flowing passage of air through the property which would, in time, alleviate the condensation and black spot mould that had been encountered.

From Timberwise’s experience, the issues observed at this cottage are not uncommon, as many people are unaware of the dangers of allowing vegetation to grow up the outside of the property and effectively allow water to penetrate through the single skin brickwork. Overall this will ultimately lead to high moisture levels internally and can cause issues with timber throughout the property leaving them prone to attack by a variety of wood boring insect‘s and in the worst case scenario, Dry rot.

Contacting the damp and timber specialists

To arrange a damp and timber survey through Timberwise is easy. Simply call your local Timberwise office on the number below or complete our on­line survey request form and your local Timberwise team will get in touch to arrange the survey for you. If you are wanting to learn about our cost of our damp surveys we provide then please call 0800 288 8660 or request a survey online.