Placefirst, a Manchester-based specialist development company, signed an exclusivity deal with Liverpool City Council in January 2016 to transform and regenerate the derelict properties on the Welsh Streets of Toxteth.

A firm fixture in Liverpool’s history, the streets were named after Welsh towns, villages and valleys as the properties were built and inhabited by Welsh workers in the late 19th Century. Left abandoned since the turn of the century, the streets were catapulted into the limelight when they became the backdrop for the award-winning BBC gangster drama “Peaky Blinders”. Although the show is actually set in 1920’s Birmingham, much of the filming is done in and around historic Liverpool.

Before Placefirst’s involvement, the original plan was to tear down the terrace homes and build completely new homes from scratch. This plan was met with public outcry and opposition from the people of Liverpool and Beatles fans alike as Beatles drummer Ringo Starr spent the first few years of his life in Madryn Street which is part of the Welsh Streets.

Placefirst’s “masterplan” involved retaining and remodelling 93% of the existing properties to create a mixture of 300 attractive and energy efficient 2,3 and 4 bedroom homes. The project was more than just building homes, Placefirst wanted to create a sense of community with old dark cobbled rear alleyways converted into communal green gardens.

Being a native of Liverpool, and with his ear to the ground, Timberwise Liverpool Stuart Hankinson had read about the proposed project in the local paper and had contacted Placefirst directly. Timberwise were called upon by Placefirst to survey the existing properties for wood-rotting fungi, woodworm and dampness. The brick terraced houses had been abandoned for some time so were empty at the time of the survey. 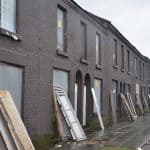 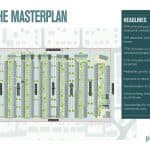 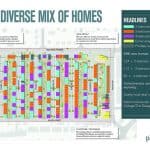 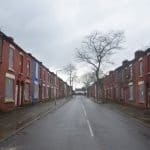 The eerie and derelict Welsh Streets 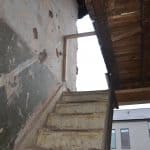 Exposed staircase and wood floorboards during the renovation.

All the properties underwent a timber and damp survey which highlighted that there was much internal damage due to water ingress which was causing timber decay in some properties, as a result, all homes needed a damp-proof course and some also needed treatment for Dry rot and Wet Rot.

During the surveys, evidence of Wet rot fungi (Coniophora puteana) was apparent in some of the properties. Wet rot is found in timber that has become damp as a result of coming into contact with, for example, damp masonry. As the properties had been abandoned and not maintained for some years, the cause of attack by wood-rotting fungi was caused by the timbers coming into contact with excess water ingress via external defective roof fabrics.

Placefirst arranged for the decaying rafters to be removed and then renewed along with associated wall plates. During the renovation works the roof timbers were exposed and given a coating of duel-purpose insecticidal and wood preservative treatment.

During the survey, evidence was found of Dry rot fungi (Serpula Lacrymans) to the bay window’s main bressumer beam and associated floor timbers. Dry rot is a serious problem for property and is dangerously unique is its ability to progress extensively throughout a property, destroying the timbers’ natural goodness. Depleting timber of such components leaves it in a brown brittle state which is unsafe in any property.

Based on visual inspections and the readings obtained at the time of the survey, Timberwise recommended the installation of the DriWisetm damp proofing system to the walls. 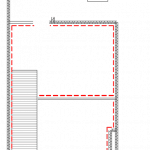 An example sketch plan of works for the homes on Voelas Street. 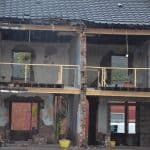 The back of the homes being taken off prior to refurbishment 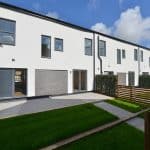 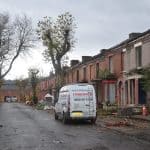 Preparing the next streets for phase 2 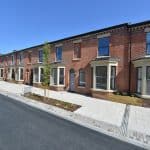 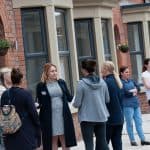 A pilot scheme was carried out on Voelas Street, designed to show the local community how the homes would look when they were fully refurbished. These properties set the standard for refurbishment across the wider Welsh Streets area. Due to the large scale and sensitivity of the project, communication was key from all involved. Timberwise, Placefirst and the other contractors were constantly in contact with one another by phone, email and weekly face to face site meetings to ensure a well-managed job without fault was achieved.

The sense of community was always emphasised as Placefirst were mindful to use local Liverpool based contractors for the project. With everyone working towards the same goal a collaborative effort was more than evident (along with a little scouse humour!) As Timberwise is a member of the Property Care Association and fully accredited for health and safety through SAFEcontractor, CHAS and WHICH? accredited contractor Placefirst knew they were in safe hands.

The first phase of properties was fully let to the public within 24 hours of their market release in August 2017. The £10m phase two development began work on site in November 2017, with Placefirst anticipating full completion by Q3 of 2019.

I was brought up in Toxteth and lived there for 30 years, in fact, my family still live there and my Grandad lived on 1 Rhiwlas Street so when I surveyed the property it brought back a lot of happy memories. It was important for the Welsh Streets to be brought back to life and not to lay in the state they were in, I’m proud that I have worked on the properties and the finish is first class

An expert opinion from the go-to property care experts

It is vital to correctly identify the damp problem you have so that the correct damp proofing solution can be put in place for your property. To correctly determine the form of damp treatment required, we recommend a damp and timber report from one of our qualified damp specialists.

Timberwise has over 5 decades of experience in identifying and providing solutions to damp using techniques such as a damp proof course. For peace of mind that your problem is rectified, call our experts today on 0800 288 8660 or request a survey online.