Woodworm treatment for a terrace home in London

The history of terraced housing started in the 17th Century and are common in old industrial towns and cities such as Manchester, Bath and areas of central London. Terraced houses are structurally built the same and both sides of each house share walls with neighbours joined together to form a row. The initial conception of this housing style is largely related to the economic boom and population increase to provide high-density accommodation for the working class in the 19th century.

In the early Victorian period, terrace homes generally consisted of two rooms on the ground floor, one of which was to be used for cooking, and one or two bedrooms on the first floor. They were very plain, without running water or sanitary provision and became widely associated with health problems. Towards the end of the 19th century, Central Government legislation aimed at improving health standards meant a rising standard in the quality of terraced homes and by the end of the 1880s more than half the population were living in more spacious two-up two-downs with running water and drainage.

Close to numerous transport amenities, the traditional Victorian terrace home in this case study is located on a sought after cobbled street in London. Our Timberwise team in London were called upon to inspect the property as the homeowner had a suspicion of a woodworm infestation. Instructions from the customer were to inspect the timbers of the ground floor bathroom for wood infestation by wood-boring insect and the cellar area for dry rot.

An inspection of the ground floor bathroom revealed the presence of a moderate widespread woodworm and rot infestation in the floor timbers. The types of woodworm beetle and wood rot infestation noted were Common Furniture Beetle (Anobium Punctatum) and Wood Boring Weevil (Euophryum Confine).

Terraced houses were introduced to London from Italy in the 1630s. Covent Garden was laid out to resemble the Palazzo Thiene in Venice.

Common Furniture Beetle, as its name would suggest, is by far the most common cause of woodworm damage encountered. Its speciality is specifically sapwood of softwood and European hardwoods. Common Furniture Beetle holes are approximately 1.5mm to 2 mm in diameter, often surrounded by a fine powdery substance otherwise known as frass.

Woodboring Weevil, on the other hand, tends to a smaller insect, known for its long snout and most commonly found on damp skirting boards and embedded joist ends. Whilst inspecting the area of the cellar and underside of the ground floor Timberwise acknowledged that while some timber renewals and dark stain protection to the joists had already been applied, the active woodworm still remains in some flooring to the adjacent flat.

A severe outbreak of dry rot was noted to the cellar floor extending to the exposed and painted brickwork of the storage bin areas. Dry rot spores are considered omnipresent and no environment is considered free from them. The spores will germinate and grow in timber with a moisture content of between 20-30%. The fine fungal thread (hypha) digests the cellulose and hemicellulose fraction of the wood but does not attack the structural lignin.

Cuboidal cracking is also characteristic of many wet rots and does not automatically indicate the presence of dry rot. Fungal hyphae may clump together into a variety of structures known as mycelia, which takes various forms depending on the surrounding conditions. They may fill a humus cavity as a ball of cotton wool like mass or grow across the surface of the timber as a grey/white skin. 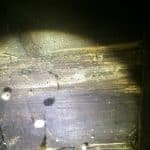 A piece of wood which has the correct moisture content 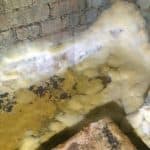 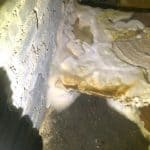 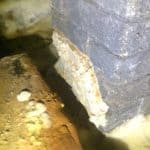 In order for Timberwise to gain adequate access to the flooring, the bath itself needed to be unplumbed and moved. To eradicate the dry rot infestation, technicians cleared away the mycelium from the floor and brickwork and then suitably drilled the brickwork a metre beyond the last signs of the infection. Following this, technicians then sterilised the floor with a fungicidal solution. This high strength solution is designed for high penetration into the substrate for a deeper, longer lasting treatment. Timberwise technicians then replaced the unsound flooring and chemically treated the entire bathroom using an insecticidal solution.

In the case of Death Watch Beetle, the period of emergence may be even longer due to their long life cycle.  Should this happen, the beetles will die upon emergence but would give the impression that re-infestation has occurred.

Today, we’re looking at both an infestation of woodworm and a dry rot attack! This certainly isn’t an ideal situation for any homeowner, but with our team here, we’ll have this property back to its former glory. ”

If you suspect a woodworm outbreak is occurring in your property click the following link to see how woodworm treatment is carried out. If you feel you may need us to carry out a woodworm survey, please feel free to chat directly to one of our property care team who would be delighted to help you further. Simply request a property survey online and we’ll help you with your property care problem. Alternatively, give us a call on 0800 288 8660.