Black mould affects properties across the UK both new and old but there are simple ways of removing black mould quickly and efficiently by using DIY products to air ventilation systems.

There are two measures that are effective in helping remove a black mould problem from your property and these are the following:

How to Prevent Black Mould From Occurring?

Preventing condensation could be as simple as making lifestyle changes. Preventing moisture, for example from damaged pipework or damaged rainwater goods would require maintenance to be carried out otherwise it may lead to a penetrating damp issue.

How to Remove Black Mould?

The first step to treating black mould is to find the cause of the excess moisture. If you do not deal with where the moisture is coming from then it is more than likely going occur again in the future. Once the source of the moisture has been identified and rectified any black mould that is present should then be safely removed with a mould eradication kit.

We have made a list of recommended tips that can you carry out in your day to day activities that will significantly reduce the amount of humidity in your property: 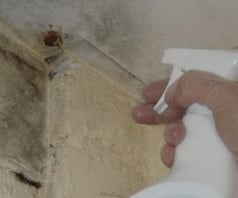 There are a number of DIY and professional solutions that you can use to get rid of black mould. But before this can happen, the black mould affected area must be sterilised. Follow these 2 steps when applying black mould treatment:

Step 1: Spray the black mould treatment onto the affected area.

Step 2: Use a sponge to rub the black mould removal product onto the surface. You should then allow 30 mins for treatment to take full effect. If the mould is still visible, then apply the same process until there are no signs of black mould.

You should also note that protective gear should be worn throughout the mould removal process. After treatment has been completed then we would recommend that you use our anti-condensation paint which maintains the surface temperature on walls. Using this with the lifestyle changes explained above will provide good remedies for preventing condensation and removing black mould.

DIY solutions, in the form of a mould eradication kit, can work to remove the black mould growth and help prevent it from reoccurring in short term. However, if you are looking for a longer-term solution then improving the ventilation in the property is the best way to tackle condensation and prevent black mould from occurring. Positive ventilation systems can provide fresh clean air throughout the property while letting the damp and stale air out of the house.

Can I Simply Wipe the Black Mould Off The Surface Work?

Wiping with a damp cloth or tissue will not remove the black mould permanently, you need to find the root cause of the moisture problem first to ensure it doesn’t come back again.

If you have a mild case of black mould in the house then using DIY solutions such as a mould eradication kit will do the trick but if it is more severe and widespread then treating the cause of the damp problem and improving ventilation is in all likelihood the most effective way to remove it.

Get in Touch with the Black Mould Specialists

Black mould in property is an ongoing concern across properties in the UK. Thankfully there are a number of solutions for removing black mould once and for all.

We would recommend contacting one of our specialists to provide expert advice on how to treat black mould as well as how to prevent it from forming in the first place. You can get in touch with us by calling 0800 288 8660 or contacting us online.