Woodworm Treatment Woodworm Survey How To Get Rid Of Woodworm The Life Cycle of Woodworm What Does a Woodworm Look Like?

We often get asked to explain what does woodworm looks like as many of our customers are not sure whether they have an infestation of woodworm or not. The obvious sign of a woodworm beetle issue is by looking at what we call ‘exit holes’ in any wood or timber. These holes are just a few millimetres in diameter and are easily visible.

However, just because there are holes present, doesn’t mean you have a current (or live) infestation. It may be that the woodworm left long ago leaving the damage behind, but this still could mean that the timber has been left weakened and potentially dangerous.

There are a number of different types of woodworm beetle that can affect property but there are tell-tale signs that you can look out for. Our list below details what to look for when you suspect you may have a woodworm problem.

If you are seeing any of the signs below then it is advisable to contact a specialist to start the process of treating your woodworm problem. You can learn more about how to treat woodworm at Timberwise by visiting the woodworm treatment page.

One of the most unfortunate parts of a woodworm infestation is that the signs of the problem are only visible at the end of the woodworm’s lifecycle. This is when the woodworm beetle breaks free from within the timber to continue its breeding.

The signs to look out for are what we call exit holes. When identifying if you have active woodworm in your property one very visual sign is the holes created by the woodworm as they exit the wood. The size of the holes varies depending on the species of woodworm but typically they are between 2mm and 5mm.

If the woodworm problem is active the holes will have a ‘clean’ or ‘fresh’ appearance. They can often only be spotted up close, unless there is a large infestation and many exit holes together. Check out our examples below of different types of exit holes: 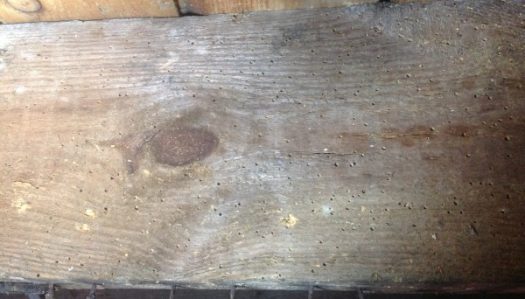 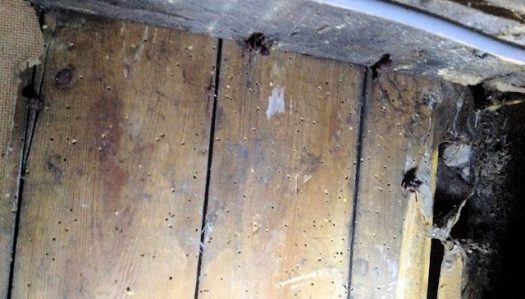 Another sign that you have a live woodworm infestation in your property is the presence of frass being left by the beetle when it chews its way through the wood. Frass is a dust created by woodworm. The frass or woodworm dust is light in colour and looks almost like very fine wood shavings.

This frass is essentially woodworm waste and it can be this waste that can help us identify what type of woodworm beetle is present. For example… the frass produced by the wood-boring weevil is ‘sticky’ to the touch as a result of there being moisture present. The images below give an indication of what to look out for:

Although this is an obvious sign that you have a woodworm problem it is also one of the least visible. The tunnels are created by the woodworm as it makes it way through the timber.

Damage wood is a clear sign that woodworm are causing damage to your property. Damage could range from weakened floorboards through to crumbling skirting boards. It is important not to confuse woodworm damage with the damage caused by dry rot or wet rot. If you are unsure which of these property care issues are causing the damage then it is important to contact a timber specialist to inspect the timber to avoid unnecessary treatments that may not be appropriate. 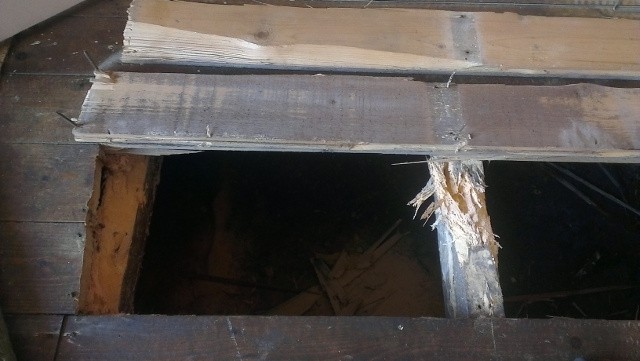 Dead woodworm beetles may be seen near timbers that are infected. Likewise, during the beetle ‘flight season’ between May and October, you could see live beetles as they emerge from the timbers. Learn more about the woodworm lifecycle here. 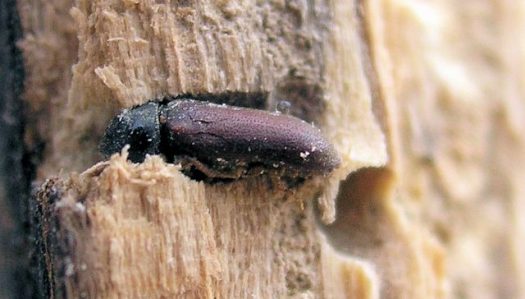 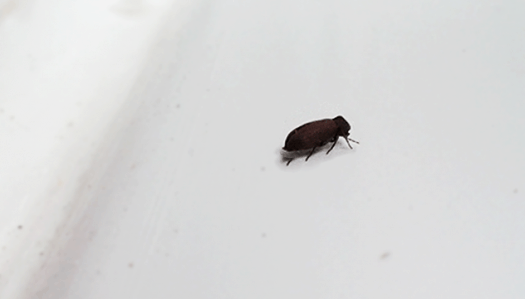 Spotting woodworm can be difficult due to the existing of woodworm beetle being seasonal. The best time to spot woodworm is between the months of March and September (this is also known as the flight season). Although quite a broad time-scale, this is when woodworm is most likely to leave the timber in an attempt to mate.

One of the first places you will notice a woodworm infestation may not actually be on the wood itself as woodworm fly to a source of light it is common to find woodworm near the proximity of your window and window sills. It is there you will be able to see the woodworm beetle crawling looking to find a mate.

● This common furniture beetle is by far the most common cause of damage encountered. Its specialty is sapwood of softwood and European hardwoods.

● Round holes approximately 1.5 ­ 2mm in diameter.
● Small piles of frass seen within tunnels or on surfaces.
● Frass will have a gritty texture. 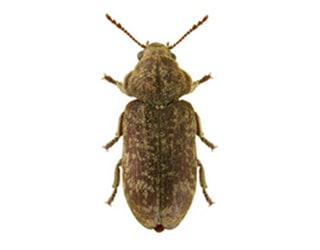 ● The Deathwatch beetle usually attacks oak, however it will attack Softwood if well­rotted and in contact with infested hardwood. 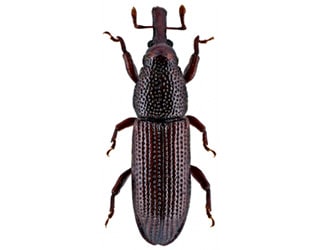 ● Small, brown and black.
● Up to 5mm in length.
● Distinctive long snout.
● Antennae one third distance along snout.

● Wood­boring Weevils attack both softwoods and hardwoods which have previously been subject to decay.
● Destruction is most commonly seen in damp skirting boards and embedded joist ends.

● Tunnelling in sapwood tends to run along the grain.
● Tunnels are narrow, around 1mm diameter.
● Frass is likely to be 'sticky' due to the dampness.

The powder post beetle unlike other beetles infest timber prior to its arrival in your home. Its arrival in the timber usually occurs when it’s being stored and cured and will later emerge from the finished product. The powder post beetle only attacks sapwood of wide ported hardwoods such as oak and obeche. The timber must be of recent origin, less than 15 years old and therefore is most likely to be seen in newly introduced hardwoods such as oak flooring or oak kitchen units.

● Round holes 1.5 - 2mm.
● Usually lots of flour­like frass - smooth when rubbed.
● Live insects may be found around break­out holes. 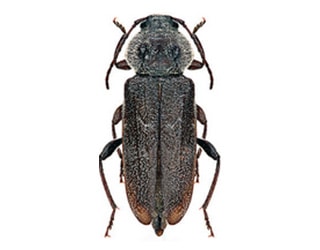 This insect is specifically localised to the south­east of England, centred around Camberley. The House Longhorn beetle attacks the sapwood of softwood and can potentially cause severe structural damage to properties.

We have listed some frequently asked questions down below from our customers about different aspects of a woodworm:

What Causes Woodworm?
Woodworm is caused from having moisture within the timber, when there is high moisture content within the timber, the female adult beetles during the summer months of the year will hatch their eggs. The woodworm beetle will then burrow through the timber and once finished, leave behind exit holes.
How Long Does It Take For Woodworm To Spread?
There is an incubation period where it will take two weeks for the eggs to hatch into a woodworm larvae. The lifecycle of the woodworm takes 2-5 years for it journey its way through the wood and exiting. Once the beetle has exited the wood, it will look for a mate to lay more eggs and once the beetles have mated, the lifecycle starts again and spread onto pieces of timber.
How To Know If the Woodworm Is Still Active?

We have explained the signs to look out for when spotting signs of woodworm but how do you know if the woodworm is still active? The common signs of the woodworm still being active are:

Does a Woodworm Make a Noise?
From all the species of woodworm the only beetle that does make a sound, is the Death Watch Beetle. The noise a Death Watch Beetle makes is a tapping or ticking sound, this is used by the male beetle to attract a mate.
Is Woodworm a Big Problem?

We would always recommend that even small woodworm infestations should be checked by a specialist as even a small issue may turn out to be a big problem, if not identified and treated earlier enough.

Should I Get Rid Of Furniture Affected By Woodworm?

Have Problems With Woodworm Beetles in Your Home?

If you are concerned with woodworm beetles in your property then don’t hesitate to give Timberwise a call on 0800 288 8660 or alternatively, you can request a survey online. A survey through Timberwise will be able to identify the full extent of the problem and determine whether woodworm treatment is necessary.