What is Condensation? What To Expect From a Condensation Survey? Condensation Control and Solutions Condensation in Loft What Causes Condensation? Black Spot Mould
Black spot mould (also known as Aspergillus Niger) is a common problem in households that down to leaks, moisture in the air and poor ventilation.

Not only does it not look pleasing on the eye but can also damage to furniture and fabrics of your property. There is also the serious issue of the impact it can have on your health.

Both new and old properties are at risk to black mould meaning it definitely something you need to be aware of. Mould can occur in any part of the building where there is a potential for dampness.

What is Black Spot Mould?

Black spot mould is a direct effect of condensation. Black spot mould usually appears in areas where there is very little air movement such as window reveals, floor / ceiling and floor / wall junctions and behind furniture that is positioned behind colder walls.

The conditions that black mould needs to develop then are cooler parts of a property where the average relative humidity is 70% or more on a regular basis.

One of the main causes of black mould growth is the excess moisture used from everyday living conditions and poor ventilation. A vast majority of households use large quantities of water vapour through cooking or showering.

Areas, where this is particularly important, is where the most water is created such as the kitchen or bathroom.

Once the black mould spores in the air they will start to germinate onto the surface once the surface has reached the dew point.

One should also consider that mould will occur in the non-living areas such as sub-floor voids and roof spaces; in these areas, it often remains unnoticed and can lead to timber decay if it is sufficiently long term and severe. 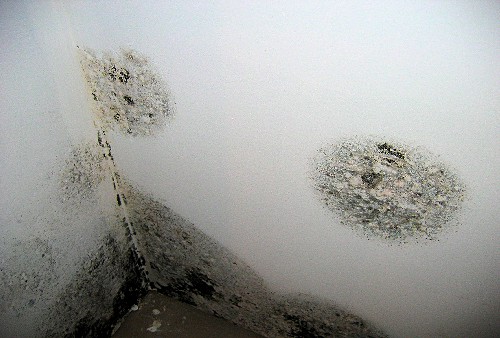 The “dabs” are the only contact between the plasterboard and the cold wall, therefore the temperature of the cold wall is transferred through the “dab” on to the surface of the plasterboard. This causes moisture trapped in the air to “condensate” out at this cold spot. This is otherwise known as “Cold bridging”.

How Black Mould Affects Your Health?

There is much concern surrounding the effect of condensation mould spores in the air on the health of you and your children.

Generally speaking, mould spores, like pollen, are air-borne and everywhere, and do not affect those in good health. Problems do occur though when mould is allowed to grow and produce spores in great numbers, and these can exacerbate problems in those suffering from asthma, or with respiratory or pulmonary conditions.

There is also the issue of allergic reactions which can be a problem for some people. If a person inhales the mould spores then this can cause the immune system to create an allergic reaction as it is trying to defend itself from an unknown entity entering the body.

How To Spot Signs Of Black Mould

Black mould is quite easy to distinguish. When active the mould will have a black or green. slimy like appearance. If the black mould is in an inactive state it will be powdery and dry. It is important to note that in either of these states black mould can still be a problem.

There is also the issue that black spot mould is not always visible from the start and can be out of plain sight. The mould problem can be in such areas as in the loft, under floorboards or behind the wallpaper.

The tell signs that is often common with black mould is the following:

How To Get Rid Of Mould

Black mould can be treated very easily. Simply washing off black mould and re-painting areas doesn’t work!  We have put together a useful guide of how to remove black mould which provides details of how to use the combination of mould eradication kits and improving the ventilation in the property (using the bathroom and kitchen fans or positive pressure units) to treating black mould for good.

This will reduce the potential for health hazards associated with such growth in domestic properties and with our recommendations a healthy living environment may be achieved. If you would like to speak to a specialist then contact us online or call 0800 288 8660.